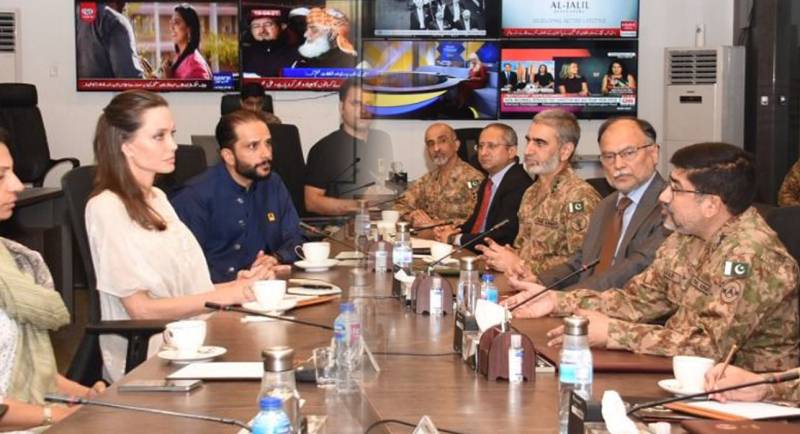 Speaking at the National Flood Response Coordination Centre in the country’s federal capital on Wednesday, the UNHCR special envoy narrated the devastation after unprecedented floods, a day after she interacted with people affected directly in Dadu – a city located on the western bank of River Indus.

The Maleficent star said she had never seen anything like the current situation during multiple visits, adding that the countries that have contributed least to climate change are suffering its most vicious impact.

The actor continued saying that she first visited the South Asian nation for the generosity of people who had shown to the people of Afghanistan over the years as a host country.

“I am absolutely with you in pushing the international community to do more. I feel that we say that often... we speak of aid appeals, relief and support but this is something very, very different,” Jolie added.

She mentioned that climate change is not only real and it is not only coming, it is already here.

Being humanitarian for many years we think of crisis on how to solve it and what can we do in order to help rebuild or help the children, she said, adding now we're in a situation like this where the needs are so great and truly every effort means life or death for so many people.

Calling for increased global financial support, the actor said people won't be here in the next few weeks, they won't make it, if enough aid doesn't come shortly.

The UN special envoy further mentioned children’s plights due to malnourishment after devastating floods. Winter is coming and I can't even imagine what it feels like to be there, Jolie said, mentioning that she is in Pakistan as a friend and will continue to return and my heart is very, very much with the people at this time.

On Tuesday, the Hollywood star visited the flood-affected areas with the Pakistan Army and International Rescue Committee (IRC) teams.