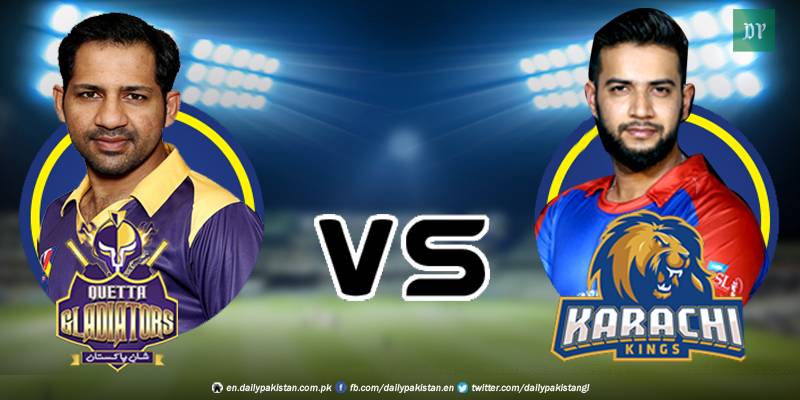 DUBAI -   Karachi Kings thrashed Quetta Gladiators by 19-run in the  second match of PSL 2018 at the Dubai International Cricket Stadium here on Friday.

Karachi successfully defended their target of 150, restricting Quetta to 130-9 to claim a 19-run victory in their season opener.

Earlier, Karachi Kings captain Imad Wasim won the toss and elected to bat in their first match of the event.

Today’s second match will be played between Lahore Qalandars and the winners of the inaugural match Multan Sultans at 9-00 pm at the same venue.

OUT! 12.3 Mohammad Irfan to Umar Amin

Multan Sultans, who are participating for the first time in the PSL, made an upset, defeating defending champions Peshawar Zalmi by seven wickets in the opening match played Thursday night in Dubai.

OUT! 4.1 Tymal Mills to Kevin Pietersen

Shane Watson and Asad Shafiq opened the innings for the two-time PSL finalists but the Gladiators lost Watson early following a farcical mix-up.

OUT! 1.5 Mohammad Amir to Shane Watson (run out)

Karachi Kings have scored 149. Will Quetta Gladiators chase it down? pic.twitter.com/JJBsQY0ZL6

Imad Wasim, the Kings captain has said that this year’s Pakistan Super League (PSL) have revamped their lineup, the trade-in of Shahid Afridi from Peshawar Zalmi being the biggest boost to their squad.

Another boost to the Kings is England captain Eoin Morgan, who was drafted in from Zalmi as well.

On the other hand, Sarfraz Ahmed’s Gladiators, made it to the finals in both the previous editions, facing a heartbreak each time as the trophy continued to elude them.

This time, Gladiators’ arsenal is stronger than ever: Jason Roy and Shane Watson, who has been traded in from Lahore Qalandars and Islamabad United, respectively, bring immense depth to an already consistent side.

When will the Karachi vs Quetta match start?

Where can you watch the Karachi vs Quetta match live?

The match is being broadcast live on PTV Sports, Geo Super, and Ten Sports.

Where can you watch the match online?

The cricket fans can view the fixture online on the PSL-T20 Official website. For the live score, updates, and analysis, you can follow dailypakistan.com.pk.

Partly cloudy but no chances of rain.