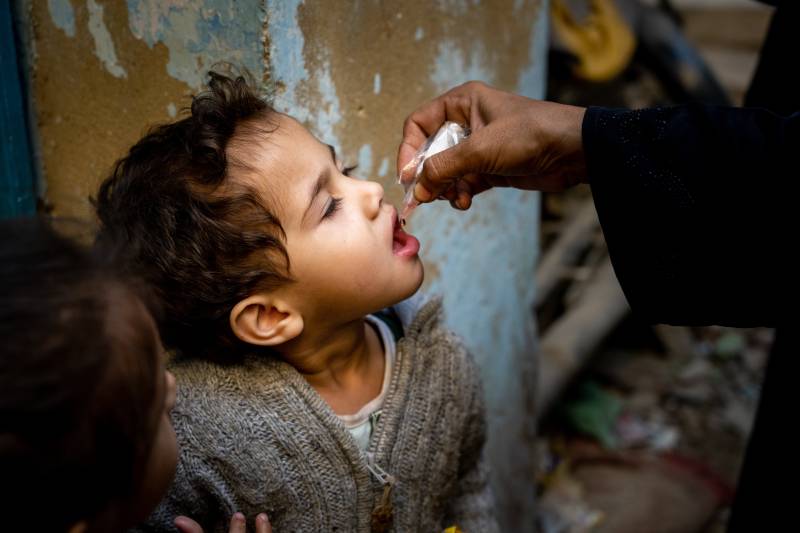 A statement issued by Pakistan Polio Eradication Programme said more than 340,000 polio frontline workers will provide polio vaccines at the doorsteps across Pakistan. A supplementary dose of Vitamin A drops will also be administered to children during the campaign.

Your cooperation can help our dedicated polio workers reach more than 43.2 million children 👦👧 with the life-saving polio vaccine.

This is the third campaign this year which was initially planned for high-risk areas but later expanded to the entire country.

At least 21.9 million children will be vaccinated in Punjab, 9.9 million in Sindh, 7.2 million in Khyber Pakhtunkhwa, 2.6 million in Balochistan 0.27 million in Gilgit Baltistan, 0.7 million in Azad Kashmir, and 0.40 million in federal capital Islamabad.

Meanwhile, the new cases took the global tally to five, with a case also confirmed in Malawi and another in neighboring Afghanistan, per reports.

WANA – The wild poliovirus type 1 has paralyzed a one-year-old child in the mountainous region of northwest ...

The anti-polio campaigns are even marked by violence due to unawareness and conspiracy theories. Banned outfits target polio teams and law enforcers assigned to protect them.

Earlier in March, unidentified attackers in the northwestern region shot and killed a female polio worker as she was returning home after a day of vaccinations while a police officer was killed in January.

Pakistan and Afghanistan are the only remaining countries in the world still trying to eradicate polio, which can cause severe paralysis in children.