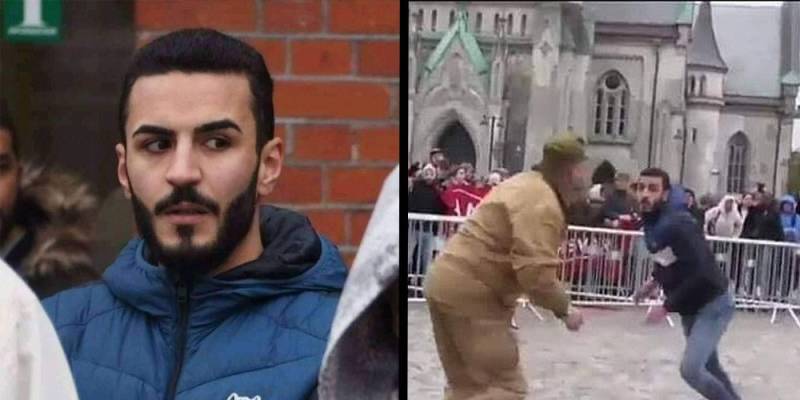 NORWAY - A young Muslim man who has stopped an extremist from blaspheming the Quran was declared a hero on Twitter.

According to details, a Muslim young boy Ilyas has been arrested who has stopped blaspheming the Quran by a racist Lars Thorson in an anti-Islam rally in Norway and a campaign for the release of Ilyas was caught on social media. Twitter is trending by trends like ”Ilyas defender of Islam” and ”Norway”.

Muslim community around the world is praising the enthusiasm and bravery of the lad and raising their voices for the release of Ilyas.

Twitter and other social media platforms are being used to convey the message that Muslims will never compromise on the honour of their religion and such act of defaming their religion would be unacceptable.

It can be seen in the video that during the anti-Islam rally, a man is defaming the Quran while a Muslim youth tries to stop him. He is arrested by the police. Turkey has also demanded severe punishment for the racist and extremist Lars Thorson.

Let's have a look at some of the tweets regarding this matter:

Our Hero ...Our Pride❤ in Norway who Protect Qur'an from Terrorists who are going to burn it........#ilyas_Hero_of_Muslim_Ummah pic.twitter.com/kvzh90qXuK

Have anything to say? Let us know in the comments box below.