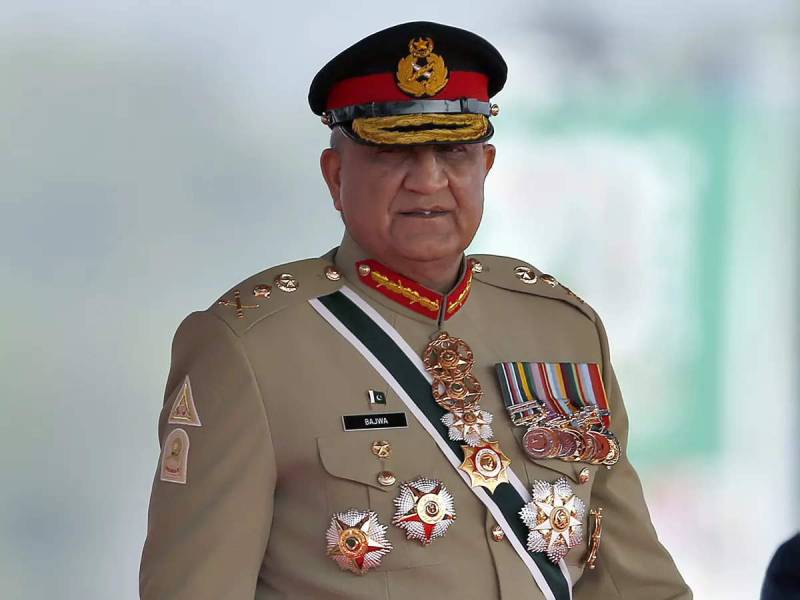 RAWALPINDI – Chief of Army Staff General Qamar Javed Bajwa on Wednesday said the military had decided not to interfere in political matters after much deliberation.

"Army has started its catharsis, I hope political parties will also reflect on their behaviour," the outgoing chief said at at the Defence and Martyrs day ceremony at GHQ.

The top commander said criticism of the armed forces is the right of masses and political parties but mentioned that those who create rifts between institutions and people will always fail.

The outgoing chief started his speech by paying tribute to the martyrs, and acknowledging the patience of their bereaved families. He reassured them that the army will continue to fulfill their financial needs.

COAS responds to criticism of the military

For the first time, the Army Chief responded to the criticism heaped at him and the armed forces by political parties. He maintained completing the role with patience for the greater good and decided to move on.

Armed forces were targeted recently by politicians with a 'false and made-up narrative' and the institution, despite being in a capacity to respond to it in all manner, stayed calm, he said, reiterating that 'patience has a limit'.

He stressed the ability to accept electoral defeats with grace, saying individuals and parties come and go, adding that no specific person can solve the quagmire. All political forces need to come together to find a long-term solution.

Bajwa said it was proud for him to serve armed forces as commander for six years and added that the peace in cities and villages is accredited to the sacrifices of its martyrs.

He reiterated that the key role of the armed forces is to protect the boundaries but mentioned that forces go at lengths in hard times. He said armies across the globe are seldom criticised, however, Pakistan Army is often subjected to criticism.

He linked the army’s involvement in politics behind unprecedented criticism. That is why in February, the army decided to not interfere in politics, COAS said.

People hurled allegations at forces and false narratives were peddled to spread chaos in the country, he said, reiterating that the military leadership can do anything except for going against the county.

The top general said Pakistan Army had started its process of 'catharsis' and expected that political parties would follow suit as well and reflect on their behaviour.  He continued saying that a true democratic culture has to be adopted in Pakistan by eradicating the climate of intolerance.

Recalling last general elections, he said 'In 2018, using RTS as an excuse the winning party was called selected,' and added that after being ousted via a no-confidence motion one party started calling another 'imported.'

Its time to end this attitude, COAS said, adding that winning and losing is a part of politics and all parties should have courage to accept their triumph or loss.

The top general shared his views on the army’s performance and actions in Bangladesh during the 1971 civil war. East Pakistan was a political debacle and not a military one, he maintained, adding that Pakistan Army was outnumbered but fought valiantly.

Chief of Army Staff (COAS) General Qamar Javed Bajwa will be addressing a gathering at a delayed ceremony of Defence Day today (Wednesday).

The ceremony held at the Army Auditorium was attended by army officers and others to pay homage to the martyrs and victors who rendered supreme sacrifices in defence of the motherland on September 6, 1965.

Gen Bajwa's stint as Pakistan Army Chief is all set to end on November 29 while the government has initiated a process to appoint the next COAS.

Every year, the main ceremony to commemorate Defence and Martyrs Day is held on September 6, but it was postponed this year in solidarity with victims of relentless monsoon rains that flooded parts of the country.