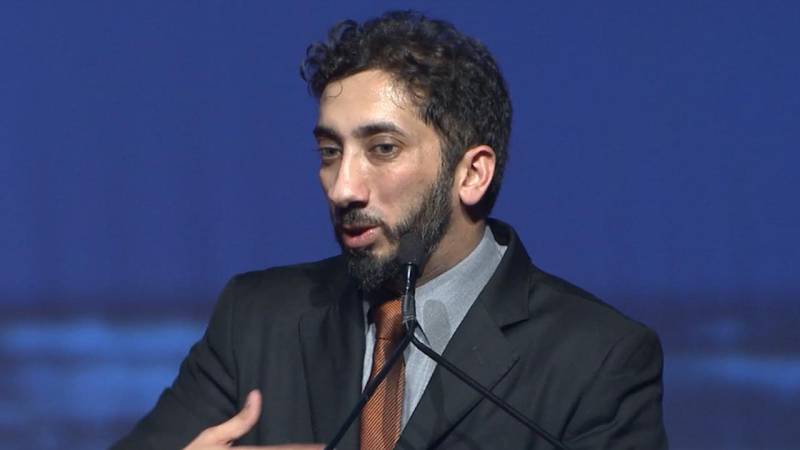 DALLAS- Renowned religious speaker Nouman Ali Khan completely refuted the allegations of inappropriate interactions with female followers hurled by a group of members claiming to be his friend, while offering a cross-examination to resolve the dispute.

Nouman took to Facebook in the pre-dawn hours of Saturday, after two religious personalities named Mozaffar and Navaid Aziz claimed that the speaker confessed to have interacted with female devotees in an unsuitable manner.

In his detailed response, the American preacher started off by testifying that he never used his public platform as a means to take advantage of anyone.

He termed the allegations slanderous while noting that the accusers simply created a ripple effect in order to tarnish his repute.

He stated that during the last twenty years when he was guiding people, he interacted with thousands of followers and the girls enrolled at his campus could not claim about inappropriate interactions in the least bit.

The CEO of Bayyinah Institute then referred to his personal life indicating that he definitely had interactions but they were not predatory in nature.

"I did, in fact, pursue remarriage with the help of my family. Along that process I communicated with a few prospects with my family’s knowledge and consent and that has been used, distorted and manipulated way out of proportion and turned into something it isn’t," he stated and added that such communications were between consenting adults for a dignified purpose.

The speaker expressed that if his actions were a threat to the community, then proof substantiating it should be presented.

"Lies are best told with a grain of truth. The people who accused me are not interested in clarification nor in rectifying the matter," he added.

Khan claimed that the scholars who came to him had already made up their minds and they even blackmailed, threatened, harassed and warned about painting him as a threat to Muslim community provided he continues preaching people through sermons or video message.

"With these threats, I was terrified at first that those years of service will be brought to ruin even if later these claims are proven false. Everyone’s attention will be on this non-sense and not the work and contribution that actually matters," Nouman noted.

He also disclosed finding evidence against the accusers claiming that they were explicitly lying for a scheme.

"My employees discovered loads of explicit illegal activity that some of these individuals were involved in knowingly and others were just along for the ride at the expense of me and my company."

Nouman noted that the accusers claimed 'verifying' the allegatiosn against him which was not true.

Referring to the contract which the accusers claimed to have been breached by him, Nouman noted that he wanted the seniors to intervene and verify the allegations adding that a neutral adjudicator would have 'compromised their agenda so they threatened to not meet at all if anyone from the outside was allowed.'

He admitted that to save his whole life work, he abided by the demand to not speak in public or teach, however, he claimed that the individuals kept meeting when he was on a pilgrimage giving him no opportunity to even defend himself.

"I even met members of the community that attended and were disgusted by these gatherings."

The instructor also stated that those who accused him lied in written to the heads of organisations saying that he have been banned from speaking at major conventions.

"I spoke to the heads of those conventions asking them if that was the case and their lies were laid bare."

He further asserted that one of the accusing group admitted multiple times to being blackmailed to take part in this witch hunt.

Khan also opened up about Mozaffar, who initially hurled allegations while claiming to be his friend from last twenty years, expressing that in that span, he had talked to Mozaffar only for a dozen times and his claim about knowing Nouman's family was far from the truth.

"A mediator isn’t supposed to be an instigator," he stated and added that until this disappointing turn of events he knows little to nothing about his family and Mozaffar knows virtually nothing about him.

Nouman also supposed that he would be thanking the accusers on the judgment day for taking the burden of his sins from him.

Addressing the audience, the preacher declared that he was imperfect, however, he promised that whether online or at some location he would carry himself with the same dignity.

He indicated that he was not a scholar or speaker but was only sincere in his work for which Allah had put a love in the hearts of people.

"I will no longer entertain these claims and allegations because I have more important things to do with my life," he declared.

The televangelist prayed to Allah to allow him to serve his book Holy Quran terming himself a "beaten, humbled slave."

Lastly, Nouman Ali Khan clarified that he would not wish this kind of onslaught for the accusers.

"I would rather not speak about this again as it is a distraction from Allah’s book that is much more worthy of being spoken about," concluded the message.

Hours after the clarification, Nouman posted another message offering himself to be scrutinised for the allegations.

He clarified that the interactions were carried out after mutual consent but 'there was no questionable intent behind them'.

He affirmed that the 'victims' would be safe from public scrutiny and a 'theatre free environment' should be allowed with elders in place to cross-examine, discuss and then conclude the debate.

The clarification came in the backdrop of scathing allegations that Nouman had inappropriate interactions with his female followers claiming that the preacher had confessed to that advances as well.