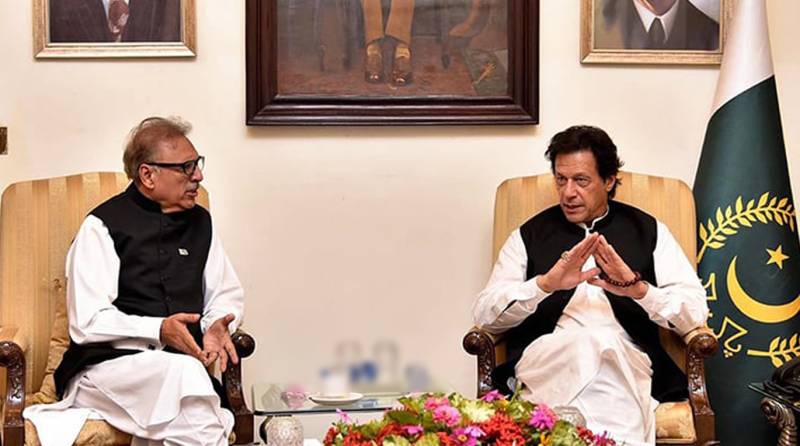 LAHORE – Former Pakistani Prime Minister Imran Khan on Wednesday claimed that President Dr Arif Alvi will have a word with him before approving the appointment of the next army chief.

The controversial statement from the defiant politician has sparked new debate as legal experts claimed that President cannot consult anyone before approving a summary for the army chief's appointment as it opposed Constitution and its spirit.

PTI chief made the remarks during an interaction with journalists at his Lahore residence. “President Dr Arif Alvi will definitely consult me before the key and take a decision as per the law and Constitution,” Khan told media personnel, saying he leads the party that Dr Alvi belongs to.

Khan claimed that the neutrality of the upcoming top general had already been compromised by the involvement of the PML-N head Nawaz Sharif in the process. He reiterated that the deposed prime minister, who is nowadays enjoying vacations with family, would sought pledges from whoever they want to appoint to sideline Pakistan Tehreek-e-Insaf from mainstream politics and to close all pending cases.

Responding to a query, the PTI chief, who is recovering from bullet wounds, dismissed outgoing chief Gen Qamar Javed Bajwa’s statement about “false narrative” during his Wednesday speech.

He claimed that the cipher was presented before NSC which decided to demarche the US envoy in Islamabad. The former premier then questioned how come a ‘false narrative’ was created?” and continued saying that President Alvi had also written a letter to the chief justice of Pakistan about the cipher.

Shedding light on his future course of action, he said I have managed to defeat the establishment and ruling alliance with the support of Pakistani people and will do so again in the next elections.

RAWALPINDI – Chief of Army Staff General Qamar Javed Bajwa on Wednesday said the military had decided not to ...