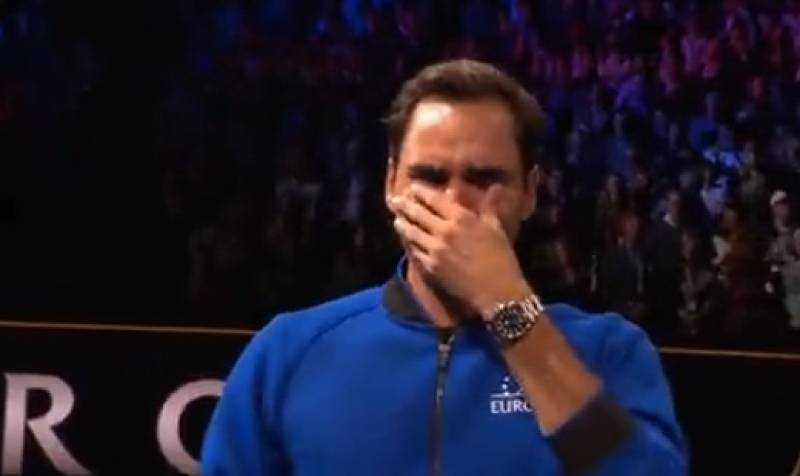 LONDON – Swiss tennis star Roger Federer wrapped up his glittering career with an emotional farewell after he lost doubles while playing alongside Rafal Nadal at Laver Cup in London.

Federer, who has won 20 Grand Slam single titles during his career, was seen in action for the first time on Friday since he suffered defeat in quarter-final at Wimbledon in 2021 before undergoing another bout of knee surgery.

After his final match of the career, all sellout crowd of 17,500 spectators rose and salute to him for gracing the game during his 24-year-long career.

The environment of the arena turned emotional when Ellie Goulding sung and a montage of Federer's feats was displayed in the court.

"We'll get through this somehow. It's been a wonderful day. I told the guys I'm happy, not sad," said Federer, who announced last week the Laver Cup in London will be his final ATP event.

If there's one thing you watch today, make it this.#LaverCup | @rogerfederer pic.twitter.com/Ks9JqEeR6B

"I enjoyed tying my shoelaces one more time, everything was the last time," he added. "Playing with Rafa and having all the greats here, all the legends."

Federer broke down into tears as he paid tribute to his wife for supporting him throughout his career.

It was a magical evening yesterday. Thank you again to all the players and fans who were here to share this moment with me. It means the world ❤️😊🙏🏼 pic.twitter.com/IKFb6jEeXJ

“It was a magical evening yesterday. Thank you again to all the players and fans who were here to share this moment with me. It means the world,” he wrote on Twitter.