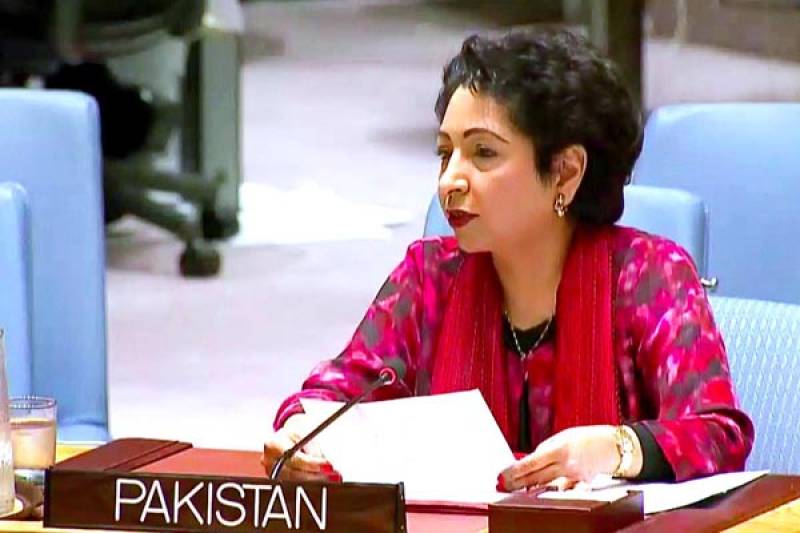 NEW YORK - Pakistan’s Ambassador to the United Nations Dr Maleeha Lodhi has said that longstanding disputes must be resolved to save young people from becoming victims of armed conflict.

“The young are some of the worst victims in situations of armed conflict, humanitarian crisis, foreign occupation and longstanding and unresolved disputes,” the ambassador said while speaking in the UN Security Council debate on Youth, Peace and Security on Tuesday.

As a result, Lodhi said, their sense of justice and their patience is frequently tested by the inconsistent and often selective global response to their pain and suffering.

Emphasising the need to break the nexus between desperation and hopelessness, the ambassador said that the toxic message of violent extremism preys on the vulnerability of youth, recruiting them to its violent ways by playing on their sensitivity to injustice and oppression, and propagating hate, intolerance and violence as the sole response to numerous inequities.

“If one has nothing to live for, one finds something to die for,” she added.

She pointed out that many of the fundamental causes enraging our youth are often conspicuous by their absence in the international discourse on these issues. “We need to fight the ‘violence of exclusion’ by talking to young people, listening to them and giving them the voice that they deserve.”

The envoy quoted what the UN Secretary General Antonio Guterres had said recently, “No one is born a terrorist, and nothing justifies terrorism, but factors such as prolonged unresolved conflicts, lack of the rule of law and socioeconomic marginalization can all play a role in transforming grievances into destructive action”.

Nearly 46% of the global population is under 25.

Underscoring that the world today has more young people than ever before, she said that many parts of the world including Pakistan have a youth bulge.

“Inspired by hope and optimism and an unbridled sense of idealism, the young are agents of change in their communities and societies,” she asserted.

“It is time to recognise that youth are not merely instruments of war making but essential partners in peace-building. They are architects for economic and social development and the establishment of effective, inclusive institutions”, she asserted.

Lodhi told the 15-member Council that Pakistan has led the charge in successfully implementing holistic and comprehensive strategies to counter the narrative of extremism, and at the same time, engage the youth so that they can become productive members of the society.

The ambassador concluded by urging the international community to recommit to build on the positive energy and innovative spirit of the young, to strive for a world where the illusion of cynicism gives way to the ideal of hope, and equal and inclusive opportunities available to the young are commensurate with their boundless ambitions. “This is the least we owe to them,” she added.