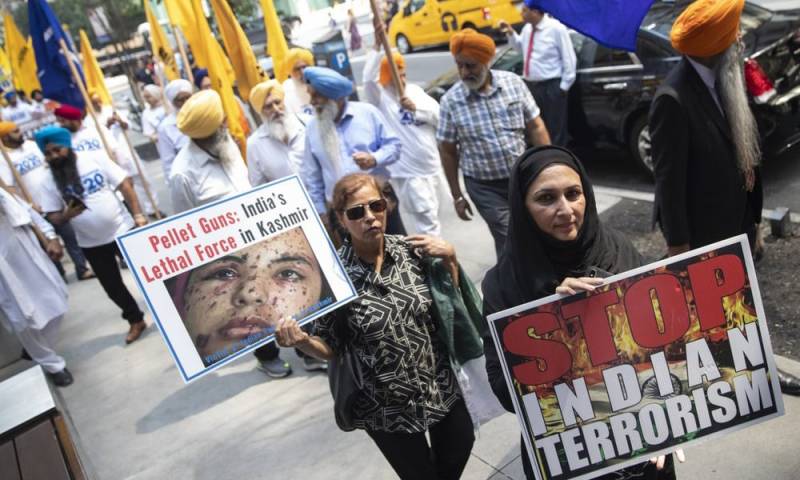 NEW YORK - Hundreds of American-Kashmiris, Pakistanis and Sikhs on Saturday staged a demonstration in front of the United Nations building calling on the world body to play its role to protect the Kashmiri people suffering under tight Indian military-imposed curfews and to decisively move towards implementing its resolutions that pledged to them the right of self-determination.

Waving banners and shouting slogans, the demonstrators condemned India's Aug. 5 action in annexing occupied Kashmir that has sparked off a crisis in the disputed region.

They also voiced support and solidarity with the Kashmiri people now languishing under siege.

Today's (Sunday) demonstration was a part of a series of anti-India rallies being held across the United States demanding that the world community do justice to the struggling Kashmiri people.

Speakers at the rally called for the Indian government to immediately reinstate the protected status of the disputed state, lift the siege, and enter into peaceful negotiations to determine the future of Occupied Kashmir in accordance with the UN resolutions.

Speaking to the crowd, Azad Kashmir Prime Minister Raja Farooq Haider Khan said that the future negotiations on Kashmir should focus on conflict resolution, not management, in an effort to end the Indian occupation once and for all.

The Kashmiri leader issued a clarion call for unity at this critical hour, appealing to the people to speak with one voice on the issue.

The AJK prime minister also spoke about the harsh conditions in which the people were living in occupied Kashmir, with communications cut, movement banned and supplies running out.

A prominent Sikh leader, Sardar Amarjit Singh, also voiced support for the cause of Kashmir as he reaffirmed his call for the establishment of Khalistan.