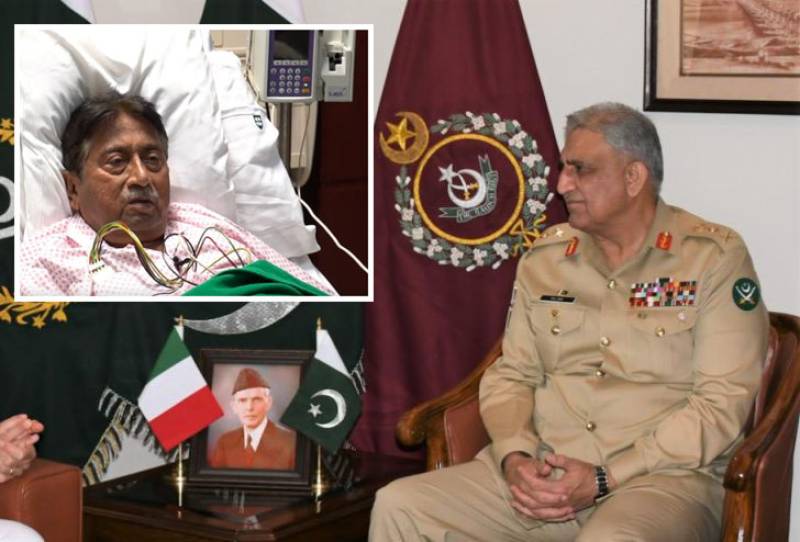 KARACHI – Chief of Army Staff (COAS) General Qamar Javed Bajwa has reportedly visited former military ruler Pervez Musharraf who has been hospitalised for weeks due to a complicated heart disease.

Quoting a source close to the family of the retired four-star general, Express Tribune reported that General Bajwa visited Musharraf in Dubai. However, the army's media wing has not confirmed Gen Bajwa's visit to ailing Musharraf.

The report says that top physicians of the Pakistan Army accompanied Gen Bajwa to the Middle Eastern country.

Quoting sources, the report said that self-exiled Musharraf and his family received the top commander. Gen Bajwa spent some time at his apartment and physicians of the Pakistan Army examined Musharaf.

The development comes a week after Pervez Musharraf’s return to Pakistan became a hot topic of discussion in Pakistan. Local media reported that the former dictator will be flown to Pakistan by an air ambulance and his treatment will continue in the country.

Later, Musharraf’s family ruled out the possibility of his return to Pakistan, citing a lack of proper treatment facilities in the South Asian country.

The family of the former army chief was assured that the Pakistani government and the military establishment would facilitate the return of ailing Musharraf.

The 78-year-old retired general has been living in the UAE since 2016 when he was allowed to travel abroad on bail for medical treatment. The retired four-star general was earlier tried on treason charges in a Pakistani court.

He was accused of seizing power in a bloodless military coup in 1999, ousting the then-elected government of Nawaz Sharif.

DUBAI – Ever since the army spokesman dropped the hint last week that the military leadership wanted former ...

He was handed death sentence, which was overturned in the long-running case, dismissing the legal process against him as unconstitutional.