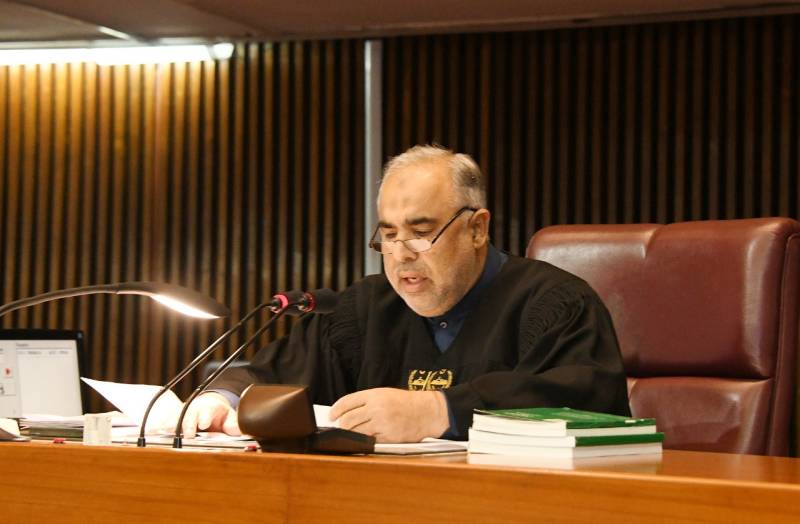 ISLAMABAD – The 41st session of the National Assembly, which was considered significant as the no-confidence motion was part of its agenda, was adjourned till March 28 after offering fateha for deceased parliamentarians.

With NA Speaker Asad Qaiser in the chair, the session began with the recitation of Holy Quran.

The #NASession has been adjourned to meet again on Monday, the 28th March, 2022 at 4:00 pm.#NASession @appcsocialmedia

Later, the speaker adjourned the hearing till 4pm on Monday.

Following the adjournment of the sessions, opposition leaders lashed out the NA speaker for using delaying tactics in tabling the no-trust resolution against the prime minister.

"NA Speaker continues to trample upon constitutional provisions. This partisan behaviour does not suit the custodian of the House. Adjournment of NA session is part of desperate efforts to disrupt no-confidence process. U cannot stop the inevitable through such underhand tactics!" he wrote on Twitter.

"Speaker provided another weak excuses to avoid tabling no confidence motion in National Assembly today. Imran can’t run forever. PM has no sportsman sprit and cannot face defeat with grace. The once great Kaptaan will go down like a rat on a sinking ship," Bilawa said.

The NA secretariat had issued a 15-point agenda for first day of the 41st session which also included the no-trust motion.

Speaker provided another weak excuses to avoid tabling no confidence motion in National Assembly today. Imran can’t run forever. PM has no sportsman sprit and cannot face defeat with grace. The once great Kaptaan will go down like a rat on a sinking ship.

The document added the vote of no-confidence against the prime minister would be moved "if leave is granted."

The Opposition has been expressing its confidence to achieve the required numbers for the success of the no-confidence motion against the premier as several ruling party MNAs have joined the Opposition.

“This House is of the view that the Prime Minister of Pakistan, Mr Imran Khan, has lost the confidence of the majority of the members of the National Assembly of Pakistan; therefore he should cease to hold office," read the text of the resolution.

The 14-day constitutional deadline as per Article 54(3) to summon the National Assembly session on the Opposition requisition expired on March 21.

The NA secretariat in a statement said that the session will be summoned on March 25 due to the two-day 48th meeting of the Council of Foreign Ministers of the Organisation of Islamic Cooperation (OIC) in Islamabad, which was held on March 22-23.

ISLAMABAD - Prime Minister Imran Khan on Thursday urged public to join PTI's rally to be held on March 27 in the ...