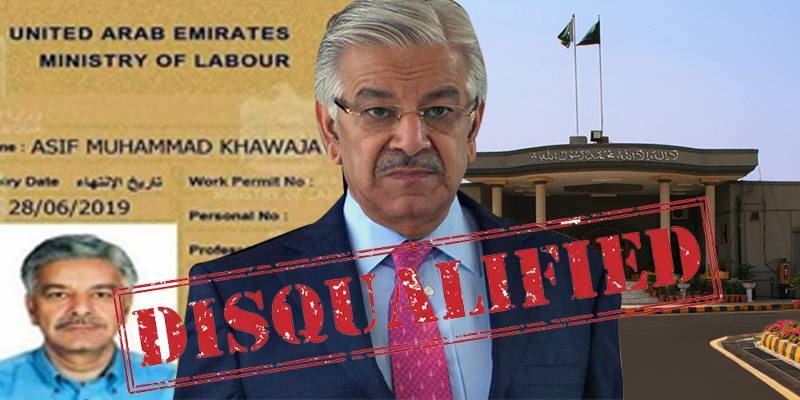 ISLAMABAD - The Islamabad High Court dealt another blow to the ruling Pakistan Muslim League Nawaz after it disqualified the country's Foreign Minister for life in the disqualification case on Thursday.

Khawaja Asif, who is a central leader of PML-N and had contested elections from Sialkot in 2013, was declared ineligible unanimously for holding office, on account of Article 62 (1)(f) of the constitution in a case related to his foreign permit (iqama).

While concluding the short judgement, the bench observed that "it is not a pleasant duty for any court to be called upon to examine and exercise powers of judicial review which may lead to an elected representative being disqualified as Member of the Majlis-e-Shoora (Parliament)".

"We have handed down this judgment with a heavy heart not only because a seasoned and accomplished political figure stands disqualified but more so because the dreams and aspirations of 342,125 registered voters have suffered a setback." remarked the court.

Soon after the judgment, Maryam Nawaz, former first daughter, took to Twitter and decried the directives of the court.

On the other hand, the petitioner Usman Dar thanked the party loyalists for standing by him throughout the legal battle.

The verdict was reserved earlier this month on April 10 by a three-member larger bench, headed by Justice Athar Minallah and comprising Justice Aamer Farooq and Justice Mohsin Akhtar Kayani, after listening to the arguments on a petition filed by PTI member Usmar Dar against the PML-N leader.

The petitioner, Usman Dar, who lost to Asif during 2013 general elections in the NA-110 constituency from PTI’s platform, had pleaded that Asif hid the fact of holding an Iqama, or a foreign work permit, he signed with International Mechanical and Electrical Co (IMECO), a company located in Abu Dhabi, in his nomination papers.

Dar had nominated Asif, the Election Commission of Pakistan (ECP) and the National Assembly secretary as respondents and sought relief under Article 199(1)9b)(ii) read with Article 63(1)(f).

In his reply earlier submitted before the previous larger bench, Asif said the petitioner had relied upon the documents already submitted by him along with his nomination papers prior to the 2013 elections.

The counsel for Asif had said Dar was trying to achieve his mala fide objectives and seeking re-adjudication of the election dispute indirectly.

Asif had claimed that the business relationship between the company and the respondent was in accordance with the law and did not relate to the national security.