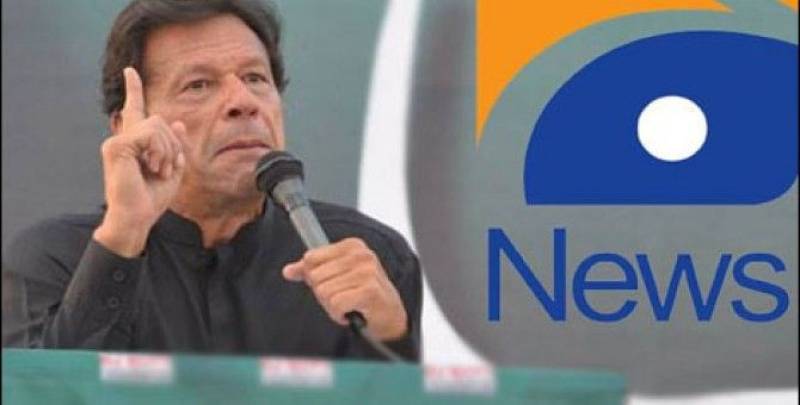 ISLAMABAD - In a major development, Pakistan Tehreek-e-Insaf on Thursday has decided to end the nearly a year-long boycott of Geo and Jang media groups, owned by Mir Shakil-ur-Rehman.

A major shift in PTI's stance came after the days-long partial suspension of Pakistan's largest TV station came to an end last week.

An international media claimed Geo restored its services after the company agreed to most of the military's demands, including changing its political coverage.

After the blackout of Geo TV in certain parts of the country, including Lahore, Islamabad and Multan at the end of March, the organisation published a message on its news website's homepage, informing viewers that access to information was their fundamental right, requesting them to inform the media house if they were not able to watch the transmission.

KARACHI - The days-long suspension of Pakistan's largest TV station has come to an end after the company agreed to most ...

Following the suspension of the TV channel, representatives of the military put pressure on the channel to bar it from giving favourable coverage to deposed Prime Minister Nawaz Sharif and airing criticism of Pakistan's top court and the establishment, the international media cited sources as saying.

One of the instructions to the news channel says that no reports should be aired regarding the ongoing corruption trial of Sharif family that portrays the former prime minister and his children as innocent, the sources said.

In June last year, the PTI had announced a boycott of the Jang-Geo media group, accusing it of giving biased coverage to the Panamagate case against former prime minister Nawaz Sharif. The case, later, led to the disqualification of Sharif.

In a meeting headed by PTI Chairman Imran Khan, the party’s media strategy committee had also decided to withdraw its representation from all forums run by the group.

Later, Imran addressing a press conference said that the  Jang-Geo group was misleading the public with its one-sided coverage of the case.

He called Mir Shakil ‘godfather of media’ who, he alleged, was trying to hide the financial wheeling and dealing of the Sharif family. In return, the PML-N regime had awarded advertisements worth billions of rupees to the media group.

“Now, even an ordinary citizen can tell that the Jang-Geo group is lying to the nation and distorting facts. Portraying Nawaz Sharif as a ‘beau ideal’ political figure is a crying shame,” Express Tribune quoted Khan.

The PTI chairman said Mir Shakil was projecting himself as the king-maker. “It’s your responsibility to expose corruption and corrupt rulers, but you’re busy telling false and fabricated stories in favour of the Sharif family,” he said.