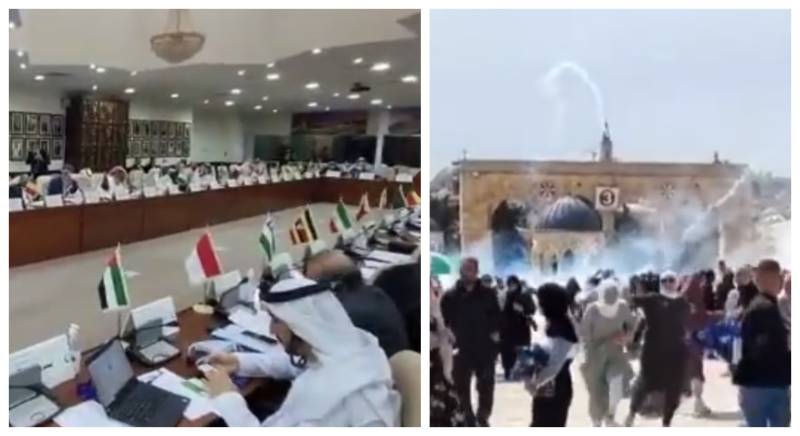 ISLAMABAD – Pakistan chaired an extra-ordinary meeting of the Organization of Islamic Cooperation in Jeddah to discuss the escalating Israeli violations against Al-Aqsa Mosque and ongoing hostilities in Palestine.

The meeting was held in light of the escalation of daily Israeli attacks on Al-Aqsa Mosque by closing its gates, invading it by groups of extremist settlers and the Israeli occupation forces, and attacking daily worshipers inside it, which led to the wounding and arrest of hundreds of them, OIC said in a statement.

Foreign Office Spokesperson Asim Iftikhar said on Monday that Pakistan participated in the meeting as of OIC- Council of Foreign Ministers.

In his statement at the extra-ordinary session, Pakistan’s Permanent Ambassador to OIC Rizwan Saeed Sheikh strongly condemned the attacks on innocent worshippers in Al-Aqsa Mosque by the Israeli occupation forces.

Rejecting the attempts to divide the blessed Al-Aqsa Mosque, temporally and spatially, Ambassador Sheikh urged the OIC Member States to do their utmost to stop Israel from crossing this red line.

He pointed out that closure to worshippers of Al-Ibrahimi Mosque in Al-Khalil was yet another affront to the sanctity of Islamic holy sites in the occupied territories.

He also expressed deep concern over the series of Israeli actions in the occupied AI-Quds Al-Sharif, aimed at changing its legal status, demographic composition and Arab-Islamic character. He added that the letter and spirit of UNSC Resolution number 2334 must be upheld not only to the extent of occupied Palestinian territories but also in other similar situations characterized by blatant disregard and violation of the relevant UNSC Resolutions.

Condemning the widespread and systematic Israeli crimes against unarmed Palestinian people, he emphasized the importance and urgency of ending the Israeli occupation of Palestine, which was the root cause of all systematic violations against basic human rights and freedoms of Palestinians.

The Permanent Representative called upon the international community to take urgent steps to protect innocent Palestinian lives, and uphold international law and principles of the UN Charter.

Ambassador Sheikh assured the meeting that, as the current Chair of the Council of Foreign Ministers (CFM), Pakistan remained ready to steer the process for implementation of the relevant OIC Resolutions, adopted recently during the Islamabad CFM Session.

The meeting reiterated the need for a two-state solution in accordance with the relevant United Nations and OIC resolutions, with the pre-1967 borders, and Al-Quds Al-Sharif as the capital of a viable, independent and contiguous Palestinian State.

ISLAMABAD – Pakistan has denounced the Israeli action against Palestinian worshippers at Al-Aqsa mosque in East ...