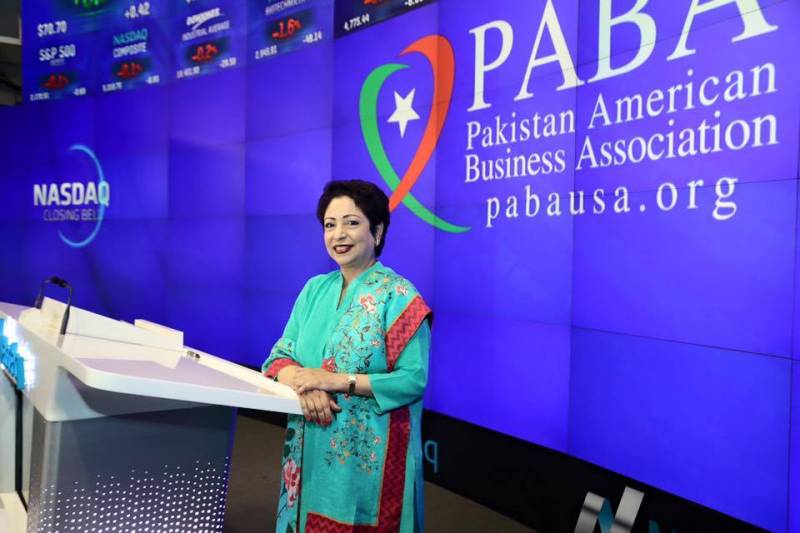 NEW YORK (News Desk) - The Pakistani Ambassador to the United Nations, Dr. Maleeha Lodhi, Friday rang the closing bell at the NASDAQ Stock Exchange in New York to signal the ceremonial end of trading for the day on Wall Street, saying Pakistan’s economy is on the upswing as it pursues the “most investor-friendly” policies in the region.

“Pakistan is on the rise,” she told traders and investors gathered at the impressive ceremony held in the Pakistan flag-bedecked NASDAQ’s office building in New York’s Time Square to mark 70th year of the country’ establishment.

The event was carried live on a giant screen overlooking the crowded iconic square as well as by major American television networks on their economic and financial segments.

“I am glad that NASDAQ today has gone green with the Pakistani flag,” Ambassador Lodhi, herself dressed in green, said before pressing the button to set off the bell.

“We are open to business, and we are open to foreign investment,” she said, adding she was honoured to represent Pakistan at NASDAQ on the Independence Day celebrations from the platform of the Pakistan-American Business Association (PABA).

“Our economy has achieved an impressive turnaround and is poised for rapid growth,” the Pakistani envoy said. Economic stability had been achieved by an enabling environment of democratic consolidation and security gains. Pakistan’s foreign exchange reserves were up, inflation down and overseas remittances at record high.

“Our demographic profile of a youthful population gives Pakistan the ability to make a quantum leap in its development,” Ambassador Lodhi said.

“We are embarked firmly on the path of realizing our vision to turn Pakistan into a regional hub, connecting the different regions it straddles by providing trade, energy and communications corridors.”

She also read out a special message from Prime Minister Muhammad Nawaz Sharif, saying, ” Pakistan has bright future powered by its hard-working people and a resilient democracy.”

Earlier, Andew Hall, a top NASDAQ official, introduced Ambassador Lodhi and congratulated the government and people of Pakistan on the Independence Day.

The Chairman of PABA, M. Siddique Sheikh, and an active member of the body, Sajjad Qamar, were among those present at the ceremony, which was also attended by Pakistan Consul General Raja Ali Ejaz.

Qamar said PABA serves as a bridge between Pakistan and the United States in promoting business and economic ties.