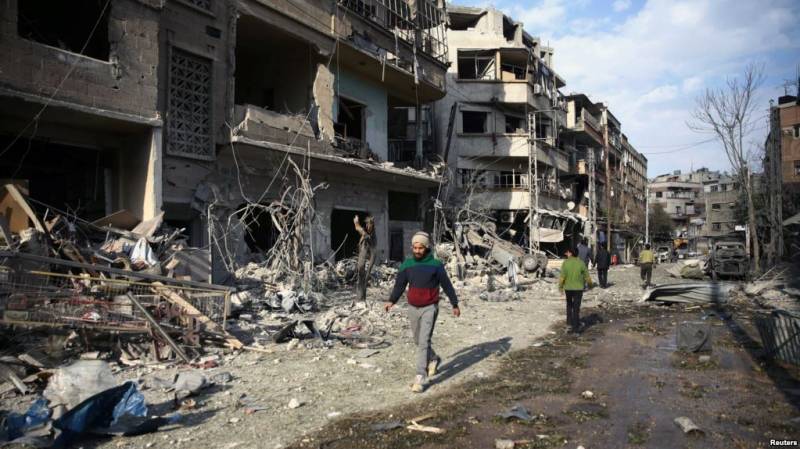 ALEPPO - Syrian government forces have killed more than 500 civilians during a week of intense bombardment of a rebel enclave near Damascus, according to the activists.

Syrian Observatory for Human Rights, a UK-based group accessed that the victims facing the wrath of Assad's forces in the Eastern Ghouta include 121 children.

Health officials in the enclave of Eastern Ghouta also accused Syrian government forces of using chlorine gas in their aerial bombardment campaign in the Damascus suburb.

Syria's Civil Defense, also known as the White Helmets, stated on Sunday that at least one child died as a result of suffocation on their official Twitter account.

Following a Regime chlorine gas attack in #Shyfuniat city in #EasternGhouta, one child was killed and widespread suffocation occurred among civilians including 2 @SyriaCivilDefe volunteers. #SaveGhouta pic.twitter.com/W2n10KGfbf

At least 18 people were treated with oxygen nebulising sessions, the statement added.

According to Al Jazeera, at least 27 people were killed on Sunday as a result of shelling by Russian-backed Syrian warplanes, which have been targeting various "districts and towns" across the Damascus suburb.

The attacks come after the UN Security Council voted unanimously in favour of a resolution on Sunday, calling for a 30-day ceasefire in Syria.

The Security Council's resolution, which passed 15-0, demands "all parties cease hostilities" throughout Syria to allow the safe delivery of humanitarian aid and evacuations of the critically sick and wounded.

The resolution, sponsored by Kuwait and Sweden, calls for all parties to immediately lift sieges of populated areas, including Eastern Ghouta. The cease-fire does not apply to military operations against ISIS, al-Qaida and other terrorist groups.

Meanwhile, United Nations Secretary-General António Guterres called for an immediate end to hostilities in the region so the sick and wounded can be evacuated.

"I am deeply saddened by the terrible suffering of the civilian population in Eastern Ghouta — 400,000 people that live in hell on earth," he said to the U.N. Security Council on Wednesday.