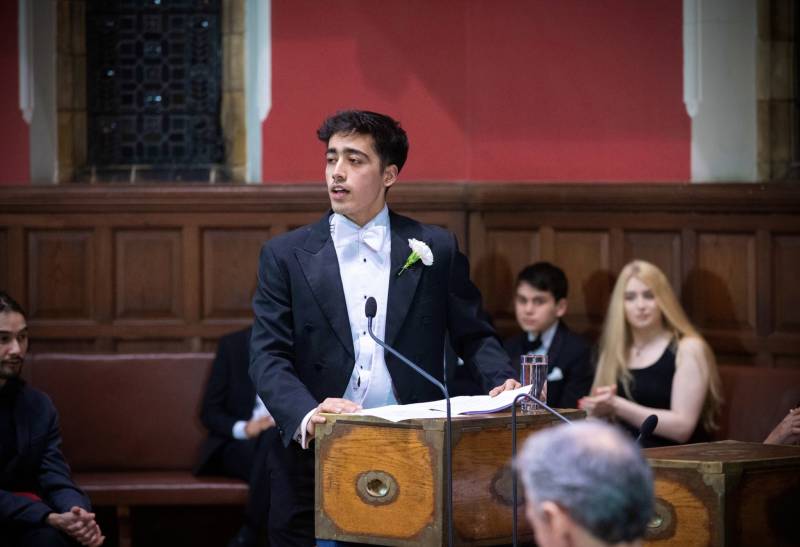 OXFORDSHIRE – Ahmad Nawaz, a survivor of the Pakistan Army Public School (APS) massacre, has assumed his duties as the President of the Oxford Union.

The heroic activist, who works for youth empowerment and tackling extremism and radicalization, was elected to the post earlier this year.

Ahmad took to his Twitter where he shared the post earlier this week. “Immensely proud to have finally assumed my duties as President of Oxford Union,” he wrote.

In my time as President, I look forward to having world leaders debate the most pressing issues, empowering young people through this platform & upholding freedom of speech!

A long way to go… pic.twitter.com/a0C1uYJJNk

Adding that he aims to gather world leaders on this platform to debate the most pressing issues, to empower youth, and uphold freedom of speech.

Meanwhile, President Arif Alvi also felicitated Ahmad Nawaz, saying that Pakistan's youngsters are its biggest hope. “We must register that despite all setbacks Pakistan will keep on shining and rising,” President said.

The heroic survivor makes it to the prestigious University of Oxford, the university of many notable Pakistanis, including Malala Yousufzai, Prime Minister Imran Khan, late Benazir Bhutto, and many others.

Ahmad moved to Britain in 2014 after the worst militant attack at Army Public School in the northern city of Peshawar where 150 people were killed, most of the students. His younger brother was martyred in the terror attack.

Ahmad saved his life by pretending to be dead when the terrorists were roaming the school building. After he was shot in the arm, Ahmed Nawaz was airlifted to Birmingham for treatment.

Last year in March, Ahmed Nawaz was elected to the Governing & Standing Committee of Oxford Union.