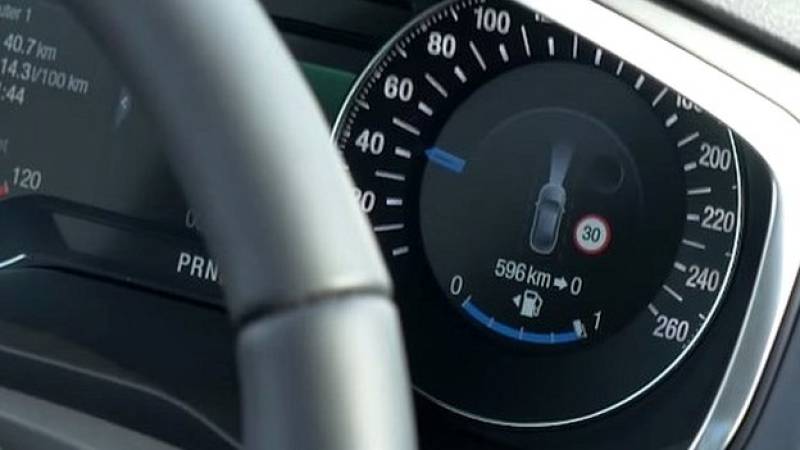 LOS ANGELES (Web Desk) - Ford is to sell a car that can read road signs and adjust its speed accordingly to ensure the vehicle is not driving too fast.

The speed-limiting tech can be activated via the steering wheel and briefly overridden by pressing firmly on the accelerator.

The car company suggests the facility will help drivers avoid fines and could reduce the number of accidents.

However, one expert said the innovation might only serve as a "stopgap".

"There's a plan for speed restrictions to be beamed to your car's computer systems and controlled from there, rather than requiring street sign visual recognition systems," said Paul Newton, an automotive industry analyst at the IHS consultancy.

"This would be part an extension of the networks that will connect vehicles, allowing cars to warn those behind them if they are slowing down, which is all part of a move toward autonomous vehicles that drive themselves," he told BBC.

The new vehicles will alert the driver to detected road signs via a read-out in the centre of the car's speedometer.

Ford's technology will become available to the public this August, when it launches the second generation of its S-Max cars in Europe.

The system, which is called the Intelligent Speed Limiter, combines two existing technologies already fitted to many cars:

• Adjustable speed limiters - these use sensors mounted in a car's wheels to detect how fast it is going. Once software detects the vehicle is at a maximum preset speed, it limits the amount of fuel that reaches the engine, rather than applying the brakes. The system does, however, allow the driver to quickly suspend the restriction by pressing the accelerator pedal to the floor, letting them overtake another vehicle or avoid a collision

• Traffic sign recognition - a forward-facing windscreen-mounted video camera scans the environment for road signs and alerts the driver to their presence. Ford cars previously fitted with this tech are limited to showing corresponding graphics on their dashboard displays

Drivers will be able to set the new system to let them speed at up to 5mph (8km/h) beyond the detected limit.

It hopes that statistics such as this will help encourage consumers to spend extra money on the technology, which it has not included as standard on the basic S-Max model.

Ford is one of several vehicle-makers to have turned to sensor-based technologies to help people drive more safely.

Cars from China's Volvo offer bicycle-detection software that applies the brakes if a cyclist suddenly swerves in front of its cars. Volvo has said it also intends to expand this to avoid collisions with animals soon.

Germany's Mercedes-Benz promotes its Steering Assist system, which prevents its cars driving too close to the vehicles in front of them and aims to stop drivers unintentionally drifting out of their road lane.

Japan's Honda uses similar technology to provide its False Start Prevention Function, which prevents a sudden lurch forward if it detects another object in close range, and makes the accelerator pedal vibrate.

Elsewhere, British computer-chip maker Plessey is developing a car seat that monitors the driver's heartbeat, which could give the car control if it suspected the motorist was having a heart attack.

Meanwhile, Australia's Seeing Machines has fitted an eye-movement detection system to several coaches in Europe that sounds an alert if it detects drivers falling asleep.

However, Mr Newton warned the rise of further intervention-based automotive technologies posed risks of their own.

"Removing the human element is one way to provide safety, but we know that computers go wrong," he said. "I suppose there will have to be a point in time when we accept that computer-generated accidents and even potentially fatalities are part and parcel of the greater good. We'll never get faultless technology."