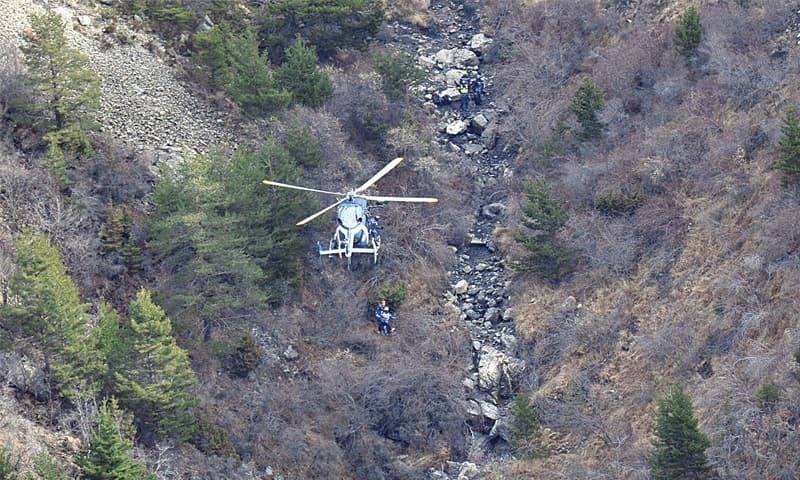 PARIS (Web Desk/Agencies) – The co-pilot of a Germanwings jet that went down in the French Alps, killing 150 people, appears to have crashed the plane deliberately, a Marseille prosecutor said on Thursday.

German Andreas Lubitz, 28, left in sole control of the Airbus A320 after the captain left the cockpit, refused to re-open the door and pressed a button that sent the jet into its fatal descent, the prosecutor told a news conference carried on live television.

Prosecutor Brice Robin during a briefing said that pounding could be heard on the door during the final minutes as alarms sounded. He said the co-pilot “voluntarily” refused to open the door, and his breathing was normal throughout the final minutes of the flight. He identified the pilot as a German national who had never been flagged as a terrorist.

Robin further said that Germanwings co-pilot appeared to want to “destroy the plane.” He added that information was pulled from the black box cockpit voice recorder, but the co-pilot did not say a word once the captain left the cockpit. “It was absolute silence in the cockpit,” he said.

An Airbus training video shows that the A320 cockpit has safeguards in case one pilot inside becomes incapacitated while the other is outside, or if both pilots inside are unconscious. Normally, someone trying to get into the cockpit requests access and a camera feed or peephole lets the pilot decide whether to accept or specifically deny access.

If there is no response, a member of the flight crew can tap in an emergency code again requesting access. If there is still no response, the door opens automatically. If, however, the person in the cockpit denies access after the emergency request, the door remains locked for five minutes, according to the Airbus video.

One of the two pilots on a doomed Germanwings flight was locked out of the cockpit before the plane crashed. Cockpit recordings recovered from the crash site indicated one of the seats was pushed back and the door opened and closed. Then knocking is heard, said the source, adding “there was no more conversation from that point until the crash”.

The source said an alarm indicating the proximity to the ground could be heard before the moment of impact.

No distress signal was sent from the Airbus A320 and the crew failed to respond to ground control's desperate attempts to make contact.

The cockpit recording showed the pilots speaking normally in German at the start of the flight, the source said, adding that it could not be determined if it was the captain or the first officer who left the cockpit.

The New York Times also cited a senior military official involved in the investigation as saying the black box data indicated one pilot was locked out of the cockpit and tried unsuccessfully to bash his way back in.

“The guy outside is knocking lightly on the door, and there is no answer,” the investigator told the newspaper. “And then he hits the door stronger, and no answer. There is never an answer.” He continued: “You can hear he is trying to smash the door down.”

The German airliner crashed near a ski resort in the French Alps on Tuesday, with all 150 people on board pronounced dead, in one of the worst ever plane disasters in the country.

France's transport minister said there were “no survivors” from the crash. The plane was travelling from the Spanish coastal city of Barcelona to the German city of Duesseldorf when it went down in the Barcelonnette area in southeastern France.

Duesseldorf airport said two special Lufthansa flights for relatives of the plane crash victims left for southern France Thursday morning. The German Parliament held a minute of silence for the victims, as did schools and companies in North Rhine-Westphalia, the state where Duesseldorf is located.

Lufthansa says the co-pilot joined Germanwings in September 2013, directly after training, and had flown 630 hours. The captain had more than 6,000 hours of flying time and been Germanwings pilot since May 2014, having previously flown for Lufthansa and Condor, Lufthansa said.