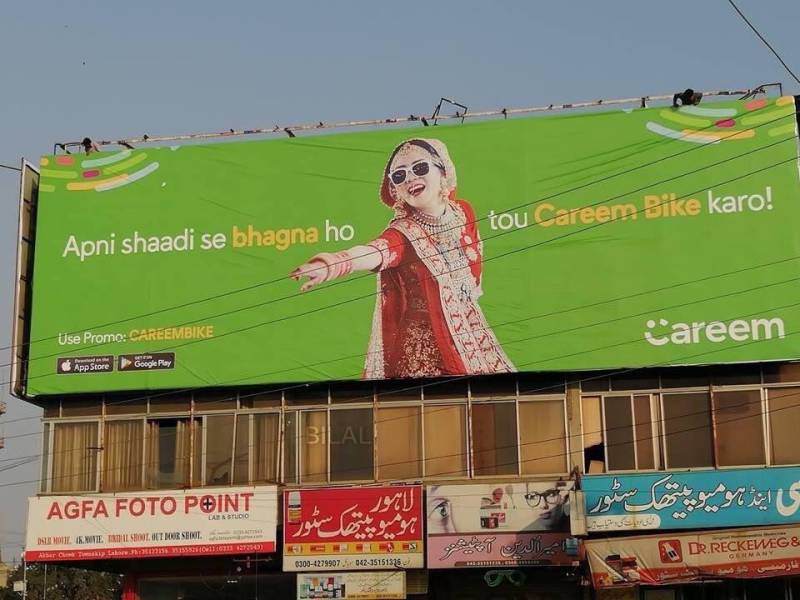 LAHORE - The Lahore High Court (LHC) on Monday (yesterday) has accepted a petition for hearing against ride-hailing service Careem for an allegedly unethical advertisement, and issued notices to the Punjab government and others to submit their responses by April 5.

The LHC was petitioned regarding the matter last week as well, but had disposed off the petition and directed her to approach the Pakistan Electronic Media Regulatory Authority for redress of her grievance. Today's petition was accepted for hearing by the court.

The petitioner today claimed that Careem used "unethical language" on its billboard, with the tagline, "Apni shaadi se bhagna ho tau Careem Bike Karo(Use a Careem Bike if you want to run away from your wedding)."

The petitioner claimed that the advertisement is against Islamic teachings, and a violation of Article 31 of the Constitution, the Parks and Horticulture Authority (PHA) Act 2012 Section 21, and PHA Lahore Regulations 2013 Clause 10.

The petitioner pointed out that the PHA is responsible for granting permission to put up billboards and other advertisements in the city, asking how such 'unethical' slogans could be displayed despite the PHA being in place.

The petitioner requested that the "immoral and indecent" advertisements be removed immediately, Careem is fined, and orders issued for action against the relevant PHA officials.

Earlier, Twitteratis had unleashed their wrath on Careem due to the brand mocking ‘social values’. People were protesting against these billboards on the social media page of the company. Many were of the viewpoint that Careem should be banned in Pakistan.

Sach a shameful cream and cheap

I have rated down #careem app as protest on this shameful and cheap ad.
Please go to app store or google play store and rate 1 star.
Please share as well.#careem #ratedowncareem #uninstallcareem #boycottcareem pic.twitter.com/iQGgZO1ZEV

The LHC accepted the petition and issued notices to the Punjab government and others, ordering them to submit their responses to the matter by April 5.