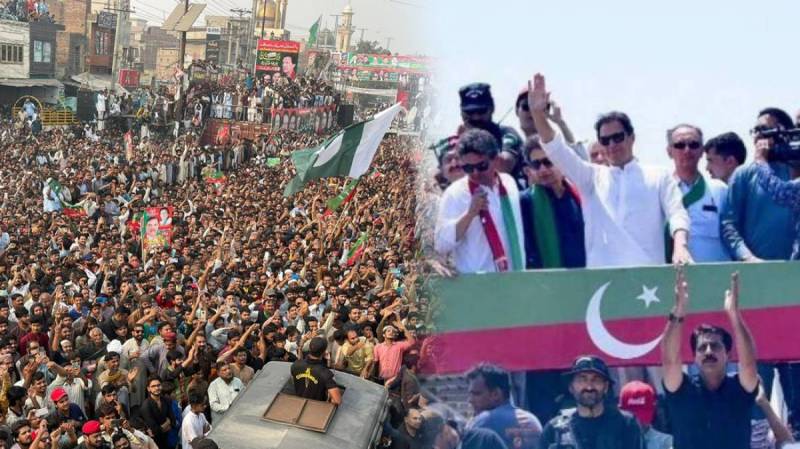 RAWALPINDI – All the routes towards Islamabad’s Red Zone were sealed as the former ruling Pakistan Tehreek-e-Insaf is set to stage a power show in Rawalpindi today.

PTI caravans from different parts of the country are heading to Rawalpindi as party chairman Imran Khan is heading to lead his party’s long march and called upon the masses to reach the for the final showdown of his protest movement which was started from Lahore.

In one of his recent statements, the defiant politician said he is resolute to head to garrison city today, to lead his party’s long march.

On Friday, the Rawalpindi administration conditionally allowed Imran Khan-led party to stage its sit-in near Faizabad on Saturday (today), amid security threats.

Meanwhile, all arrangements for the public rally have been completed, PTI leaders claimed, saying there is no hindrance in preparation of the stage for the PTI rally.

Senior PTI leader and Khan’s close aide, Asad Umar, claimed that attempts were being made to disrupt PTI’s peaceful rally and reiterated that the life of Imran Khan was in danger as the Islamabad administration was not allowing him to reach the venue in a chopper.

He said that if something happened to PTI chief, the PML-N government would be responsible and mentioned that Islamabad DC would be “directly responsible” if some untoward incident occurred with the cricketer turned politician.

He said that Imran’s helicopter would land at the Parade Ground, and questioned the authority of the Islamabad DC when the GHQ had given the PTI chief permission to use a chopper for travel.

In a notification, the authorities maintained that Imran Khan could only use the route decided by the PTI, Islamabad administration and security agencies and he was barred from using a vehicle with a sunroof before and after the rally.