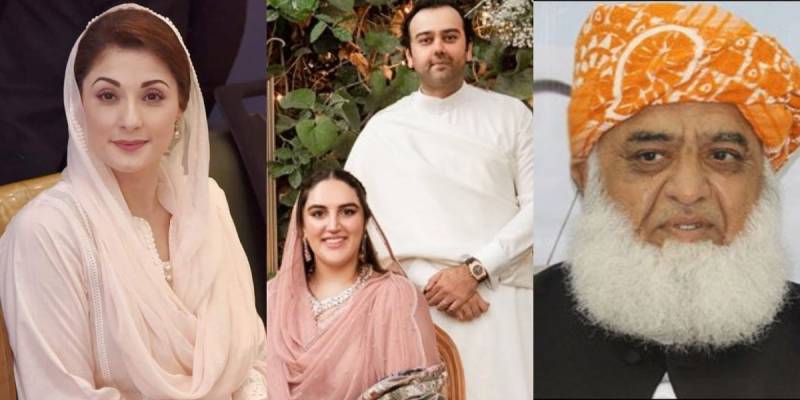 Reports say Jamiat Ulema-e-Islam-Fazl chief Maulana Fazlur Rehman and Pakistan Muslim League-Nawaz (PML-N) leaders including Maryam Nawaz, Shahid Khaqan Abbasi and Ahsan Iqbal are among those who have been invited to the event at Bilawal House.

They will reportedly attend the main function of Barat to be held on January 30.

The development comes a day after Fazlur Rehman revealed that Zardari had not invited him to the wedding function.

Meanwhile, spokesperson of the PML-N confirmed the unavailability of the vice president due to other engagement.

ISLAMABAD – The wedding of the Bakhtawar Bhutto has become the talk of the town where top leaders have been ...

Bakhtawar Bhutto-Zardari, who was engaged to the son of a US-based businessman, Mehmood Chaudhry, last year, is all set to tie the knot this week.

Mehndi ceremony is being held today as she shared a video clip of her hands adorned with Mehndi.

KARACHI – Bakhtawar Bhutto Zardari, the daughter of former president is all set for her mehndi function today as ...

The 31-year-old shared a glimpse of the latest event in an Instagram story.

The pre-wedding ceremonies of the eldest daughter of former president Asif Ali Zardari and slain Benazir Bhutto, have started with a Milad function organised on Sunday.

The women-only gathering was attended by Faryal Talpur and Dr Azra Pechuho and other party members of the Pakistan People’s Party.

The schedule of Bakhtawar's wedding with the UAE-based businessman Mahmood Chaudhry was released by the Bilawal House last week. Her nikkah will be held on January 29 while the barat is scheduled for January 30.