Asif Zardari did not invite me to Bakhtawar Bhutto’s wedding, says Fazlur Rehman 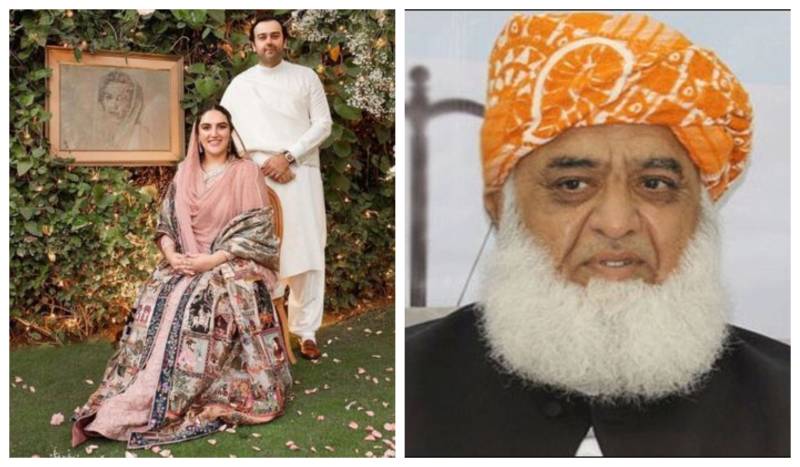 ISLAMABAD – Jamiat Ulema-e-Islam-Fazl (JUI-F) chief Maulana Fazlur Rehman revealed on Tuesday that he was not invited to the wedding of Bakhtawar Bhutto Zardari, daughter of former president Asif Ali Zardari.

The head of the Pakistan Democratic Movement (PDM), an alliance of opposition parties, revealed it when he was asked as to when he would be going to Karachi to attend the wedding of Bakhtawar Bhutto.

He expressed ignorance regarding the event, adding that Asif Zardari had not invited him.

Ahead of the wedding of Bakhtawar Bhutto with Mahmood Chaudhry, the Bilawal House organised a mehfil-e-Milad on Sunday.

Female members of the Pakistan People Party (PPP) were invited to the Milad while Bakhtawar’s aunt Faryal Talpur was also present on the occasion.

The Mehndi function of Bakhtawar, who was engaged to the son of a UAE-based businessman in December, is set to take place on Jan 27.

The Nikkah will be held on January 29 while the Barat is scheduled for January 30. Bakhtawar’s fiancé Mahmood Chaudhry had arrived in Karachi earlier this week on Flight EK600.

Meanwhile, a brief statement issued by Bilawal House revealed a limited number of guests expected at the main function – baraat – on Jan 30 considering the arrangements under the standard operating procedures due to Covid-19 precautions.

In a simple engagement ceremony in November last year, the couple had exchanged rings amid celebratory shouts and claps from the guests, who included a few senior politicians, PPP leaders, business giants, real estate tycoons, prominent lawyers, some legislators and close relatives at Bilawal House.

PPP Chairperson Bilawal Bhutto-Zardari, who was in self-isolation after testing positive for Covid-19 that time, had joined the engagement ceremony through video link.

KARACHI – Ahead of the wedding of Bakhtawar Bhutto with Mahmood Chaudhry, the Bilawal House organised a ...