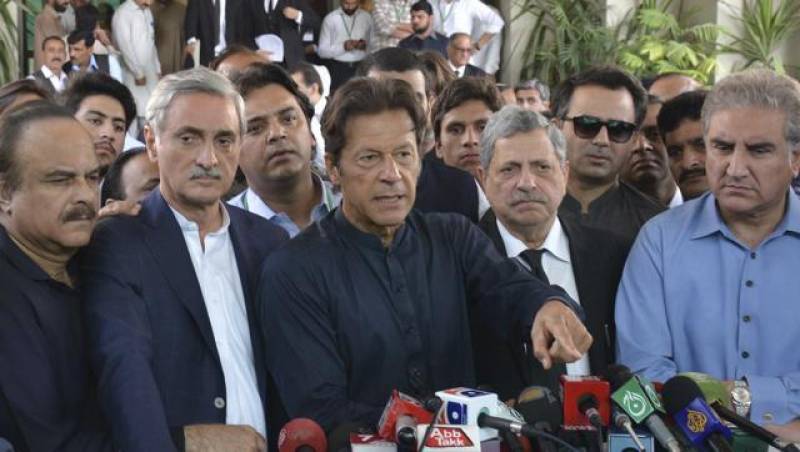 ISLAMABAD - Pakistan Tehreek-e-Insaf chairman Imran Khan urged the judges of the top court to announce the verdict of landmark Panama case soon as the 'nation was awaiting justice'.

Talking to newsmen here on Wednesday, the legislator said that everything has come to a standstill in the wake of the court's verdict.

"I request the Supreme Court, on behalf of the whole nation to announce the verdict as soon as possible," he said.

The Tehreek-e-Insaf chairman claimed that Prime Minister Nawaz Sharif cannot escape disqualification. He alleged that the premier went to Maldives on his own request despite a bomb blast in Lahore.

"The whole government is working to save Prime Minister Nawaz Sharif," Khan lamented.

The cricketer-turned-politician while describing the issue of money trail regarding his London flats, said all local players who play country cricket in England buy apartments.

"A flat worth a few lacs is being compared with those of billions, was there anything illegal in earning money abroad?" he stated.

The lawmaker claimed that he declared his flat in 2003 and so there was nothing illegal, adding that he presented the money trail in the apex court but the Sharif family failed to do so.

The PTI chief slammed the ruling party for bringing up the cases of Jehangir Tareen and Aleem Khan for their own defence.

"Aleem Khan and Jehangir Tareen were not named in Panama Leaks," he observed.

The PTI chairman, who is critical of the role of media also took aim at a media houses for drawing juxtaposition between his disqualification case with that of Premier Nawaz Sharif.