Pakistani actress, Hira Mani, has a knack for sharing her opinion which may infuriate netizens and this happened as social media users trolled actor for making some irresponsible comments on a sensitive case.

The actor stirred controversy after she said she doesn't want Dua Zehra — a Karachi girl who was reported as kidnapped in April but later found to have purportedly 'eloped' in Punjab — and her supposed husband Zaheer to part ways.

However, the Do Bol star regretted it and shared a video clip as she lamented on stepping into the matter. Hira said she got little knowledge about the case after watching some of the interviews of the young couple during a vacation in UAE.

She regretted irking the masses, saying it’s the public who makes stars and there is no shame in apologizing when one is wrong.

The teary-eyed starlet continued saying that she was shocked when her husband, who is also an actor, guided her that the case is about early marriage and alleged abduction.

She added that it also hurt as she is also a mother and admitted that it was her failure to know the actual facts behind the story which sparked a controversy.

The Mere Paas Tum Ho star also extended sympathies to the parents of Dua Zehra and mentioned some of his friends and family members who backed her in hard times and asked her to clear the air amid sharp criticism.

Pakistani actor responded after she drew backlash with netizens coming down hard on her for ‘irresponsible statement’.

It all started when Hira prayed for the teenager and her husband Zaheer to never grow apart. Keeping in mind how the teenage girl had been reported missing by her parents from Karachi but later discovered in Punjab after eloping, the prayer was deemed insensitive.

Fellow actress Mansha Pasha also joined the bandwagon and subtly hinted at Hira's confounding remarks. Mansha’s comments were unsurprising given that her husband, lawyer Jibran Nasir, pleaded the case on behalf of the teenager’s father.

The actor was quick to defend herself stating that “I am not politically right but emotionally correct,” Further adding, “That’s why I am Hira Mani.” Hira followed up with another cryptic post, “A head full of fears has no space for dreams”. 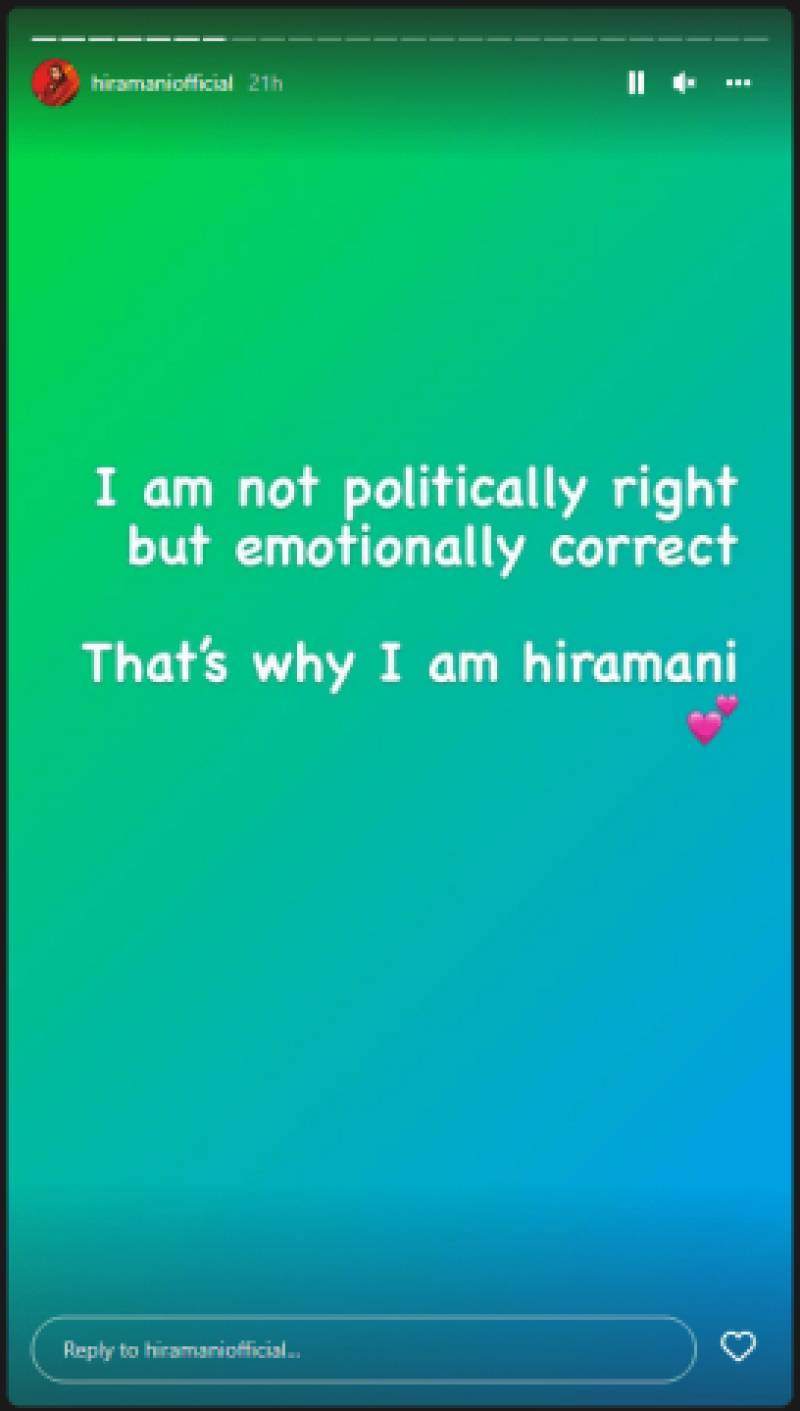 In the meantime, Dua Zehra has been brought to Karachi as per court orders with further proceedings in the case expected to take place next week. Zehra approached the court seeking shelter as she did not wish to stay with Zaheer any longer.