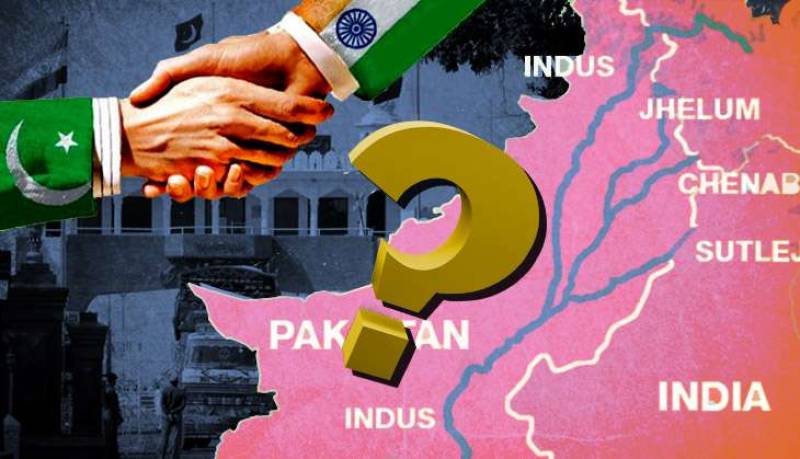 LAHORE (Ali Zain) - Pakistan and India have been busy in the war of words since September 18's Uri attack which killed 18 Indian troops in Indian-held Kashmir. New Delhi called Pakistan 'a terrorist state' and Pakistan blamed India for 'sponsoring terrorism in Pakistan particularly Balochistan province'. Both countries also took tough positions against each other at the 71st annual session of the United Nations General Assembly, trading direct and indirect allegations.

During all of this, some so-called defence experts sitting on Indian media also suggested the Indian government to take several steps against Pakistan to befittingly respond the attack in Kashmir. These pieces of advice range from large-scale war to surgical strikes. Many have even advised New Delhi to scrap the Indus Water Treaty (IWT) in order to use the water as a weapon against Pakistan, effectively.

On September 26, Indian Prime Minister Narendra Modi also headed a top level meeting in New Delhi to reconsider the IWT agreement. Although no clear decision could be taken, while addressing the tiptop officials the Indian premier said: "Blood and water can't flow at the same time."

Nonetheless, the annulment of the Indus Water Treaty –which was agreed by Pakistan and India with World Bank as a third party in 1960– would not be such an easy move for New Delhi. And there are some crucial reasons behind this assertion.

By scrapping the Indus Water Treaty, India wants to hurt Pakistan, however, if the agreement is withdrawn, it may end up irking China, indirectly. China, without any doubt, is the best friend of Pakistan. It has announced to invest some $46 billion in Pakistan under the China-Pakistan Economic Corridor (CPEC). And there is another reason as well: Chinese government and firms are actually building almost all of the dams being constructed by Pakistan in Azad Kashmir and Gilgit Baltistan.

If the IWT is abrogated, as an implication of the development China may block the Brahmaputra river –it is called the Yarlung Zangbo on the Chinese side– which supplies water to India's Assam state and a major portion of Bangladesh. As compared to Pakistan, India is an upper riparian state, and China is an upstream riparian country relatively to India.

So being an upper riparian state of the region, China's Himalayan part is the primary source of all of the major and several small rivers which flow into India, Pakistan, and even Bangladesh. China is already constructing several mega dams on the Brahmaputra river and it is also not ready to share any information related to these projects with India. In such a situation, India has been trying to sign an IWT-like agreement with China for decades.

In 1960, when the Indus Water Treaty was signed, the World Bank acted as a third party. It was responsible for the provision of funds to both countries for the construction of several dams and canals to fulfil their needs. The World Bank has also been playing a role to appoint neutral judges to hear all IWT-related issues between Pakistan and India.

So any attempt to scrap the treaty by any one of the three parties would violate the terms agreed with other two. If placed in the context, India's unilateral move to abrogate the Indus Water Treaty will bring in the World Bank –the world's top economic body.

Under the Indus Water Treaty, Pakistan was given three major rivers Indus, Jhelum and Chenab while three other rivers Ravi, Sutlej and Beas were given to India. While annulling the IWT, the most important question in the minds of the decision makers should be: "How would India stop the water naturally flowing into Pakistan?"

There are only two ways to do so, and one of them is that India would have to change the routes of the three rivers to make sure that the stream doesn't flow into Pakistan, but India. Any such mega project in the mountainous areas of conflicted state of Jammu and Kashmir would be impossible for India. Obviously, some other geographical reasons will also create hurdles for India. (For in-depth analysis, just have a look at the map of the region)

Only one thing can stop water from entering into Pakistan – Dams. But does India have enough number of them?

The only pragmatic approach to block Pakistan's water is the construction of several dams as no present Indian dam on these rivers can contain such an immense amount of water flowing into Pakistan.

The construction of these new dams would not take years, but decades. And while India would start constructing the dams, Pakistan would move to international forums without waiting for a second,  just like it did for Baghlihar Dam and Kishanganga Dam.

Justifying such grave violations would not be easy for India, despite the fact that  India got green signal for Baglihar Dam and also won rights for diverting a minimum amount of water for power generation at Kishanganga Project, because both of the verdicts were linked to the successful implementation of the IWT.

Regional Isolation – the only India thing would earn by using water as weapon:

Currently, India is trying to reach IWT-like treaties with China, Nepal and Bangladesh citing the successful implementation of the Indus Water Treaty.

If India abrogates the very treaty, apparently none of these countries would take treaties with India any step forward, knowing the fact that India, at any time in future, would use water as a weapon against them.

Summarily, the Indus Water Treaty, which has survived worst times of hostilities between Pakistan and India during last five decades including three large-scale wars in 1948, 1965 and 1971, and Kargil conflict, and it will also get through these uncomfortable days 'unchallenged.' There is only one advice for Indian Prime Minister Narendra Modi: "Just don't listen to those immaterial defence experts on TV."