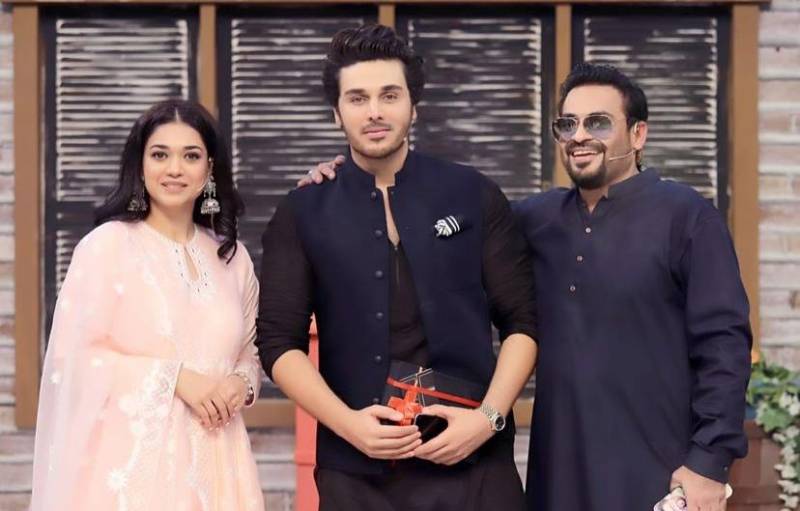 Undoubtedly, Aamir Liaquat is currently one of the most talked-about media personality. Leaving no stones unturned, the 48-year-old media personality has this time left the Internet into a frenzy as now it has given a public apology.

This comes shortly after giving the world a glimpse of his dancing skills with his infamous Nagin Dance and third marriage rumours making rounds on the Internet.

Recently, Ahsan Khan and Sanam Jung appeared together in yesterday’s episode of Jeeway Pakistan which was hosted by Dr Aamir Liaquat Hussain.

Sanam looked extremely gorgeous as she served a beautiful pastel look, while Khan looked dashing in black shalwar kameez paired along with a waistcoat.

Spreading like wildfire, Hussain publicly apologized to Ahsan Khan for the messages he sent to him in anger previously saying, ” I want to apologize to you on-air, I have a lot of burden on my heart if I have said anything wrong to you on text messages forgive me because I have said it in anger.”

Further, he requested Jung to be the mediator and help him persuade Khan to accept his apology.

Being a true gentleman, Ahsan graciously reassured Dr Aamir that an apology was unrequited and ending the slight tension on good notes.

Aamir Liaquat has been stealing ratings through his extremely entertaining Ramazam Show this season.

Saboor Aly never shies away from confrontations and her latest interaction with Dr Aamir Liaquat is proof of her fiery ...