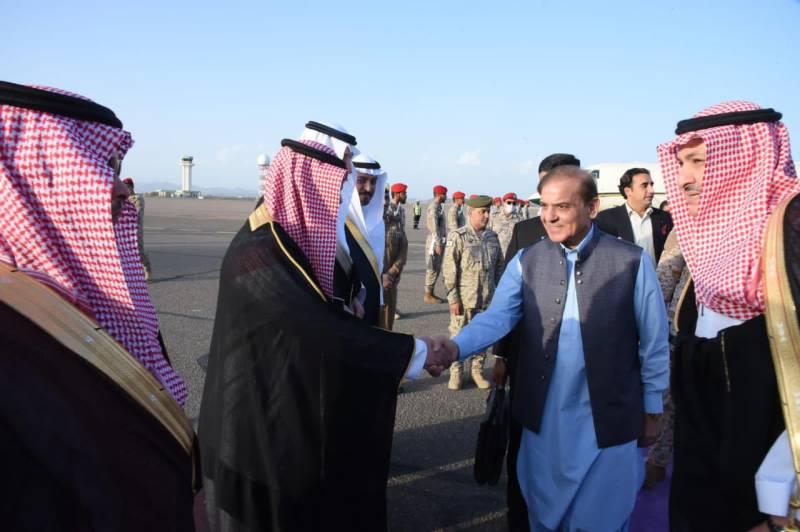 RIYADH – Prime Minister Shehbaz Sharif arrived in the holy city of Madina on Thursday at the start of his four-day official visit to the Kingdom of Saudi Arabia at the invitation of Crown Prince Mohammad bin Salman bin Abdulaziz.

The premier embarked on his first visit abroad after assuming the office earlier this month. He will have bilateral interaction with Saudi leadership with particular focus on advancing economic, trade and investment ties and creation of greater opportunities for the Pakistani workforce in Saudi Arabia.

Sharif and his delegation will also perform Umrah and offer Durood at Roza Rasool during the visit.

In a statement, Foreign Office Spokesperson Asim Iftikhar said Pakistan and Saudi Arabia are bound by a fraternal relationship marked by mutual trust and understanding, close cooperation and an abiding tradition of supporting each other. The people of Pakistan hold the Custodian of the Two Holy Mosques in the highest esteem.

The spokesperson said the prime minister’s visit to Saudi Arabia will further reinforce the growing partnership between the two countries.

The spokesperson said bilateral relationship is complemented by close mutual collaboration at regional and international fora.

ISLAMABAD – Prime Minister Shehbaz Sharif will not be accompanied by any journalist during his upcoming visit to ...