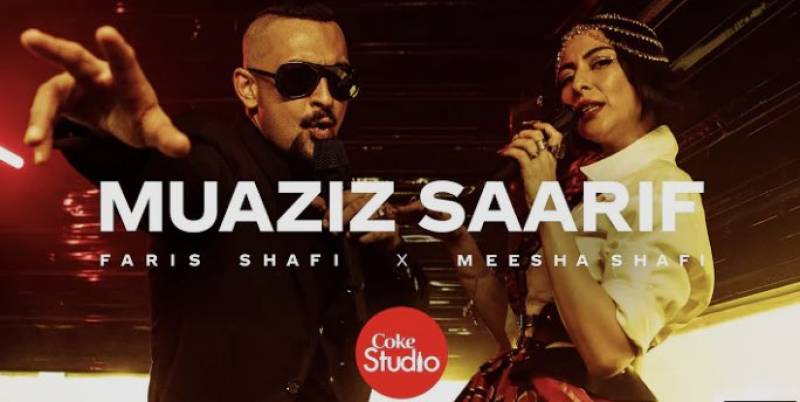 Coke Studio 14's latest offering Muaziz Saarif featuring the talent powerhouses Faris Shafi and Meesha Shafi, has been aired and needless to say, the mind-blogging rap has been an instant hit among the music buffs.

Fans flocked to compliment the duo's performance as the spectacular lyrics of the song were praised. The song has garnered mixed reviews since its release on Sunday.

Curated by Xulfi, the song has been composed and written by Faris Shafi & Meesha Shafi. The music has been produced by Action Zain, Abdullah Siddiqui and Xulfi

Twitterati sprung into action immediately after the Shafi sibling duo left the music buffs rocked and thrilled with their latest composition.

Showering them with love and admiration, some are heaping praises of Coke Studio's latest offering while others have expressed disappointment.

Was waiting for Meesha Shafi's song this season. It did not disappoint. And Faris Shafi sounds less like a wannabe compared to #YeDunya too. His flow is definitely better in this song. #cokestudio14 #MuazizSaarifpic.twitter.com/GWug9Kgc9M

If u ever feel like watching something cringeworthy, watch #MeeshaShafi in #MuazizSaarif#CokeStudio14

Now, i had to tweet about this song .. if this is not inspired in any way and original stuff .. this is a masterpiece delivered by this team and duo. Especially the rap flow by Faris is awesome (nailed it). Bravo ???? #CokeStudio14 #CokeStudioSeason14 #MuazizSaarif pic.twitter.com/O7GjhndKrO

The fact that the number of various ranges @itsmeeshashafi can sing on in #MuazizSaarif alone, surpasses the entire musical career of rockstars who whine about not getting the psl anthem gig every year.

I'm out of words for the rap. Highly appreciated.

A Lahore court has issued bailable arrest warrants for singer Meesha Shafi in a case filed against her and others for ...