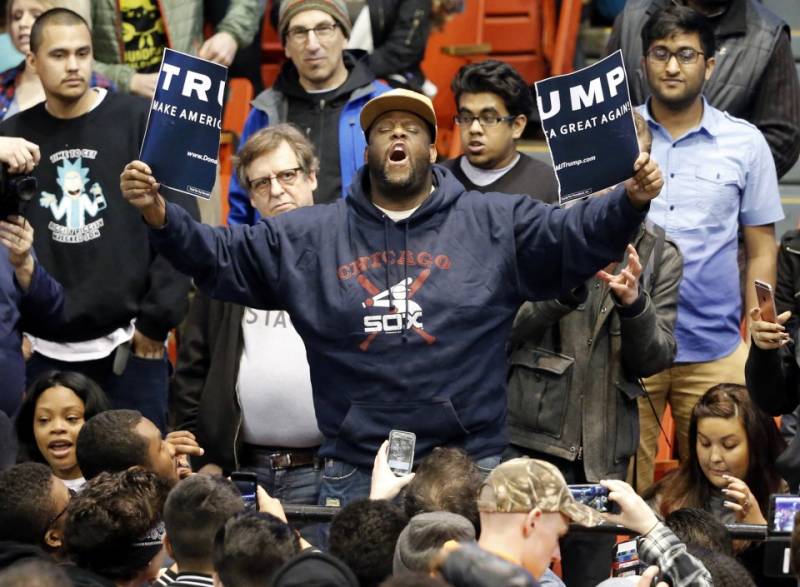 SAN DIEGO (Web Desk) - Donald Trump received an angry welcome in San Diego yesterday (Friday) as his rally was disrupted by one of the largest counter-protests organized against him.

While the scene inside the San Diego Convention Centre during Trump’s speech was relatively placid, demonstrators opposed to his controversial campaign campaign chanted slogans against him on the outside, criticizing his rhetoric against illegal immigration.

Waving the US and Mexican flags, more than 1,000 people turned out for anti-trump rallies in San Diego, a city on the US-Mexico border whose San Ysidro port of entry sees nearly 300,000 people making legal crossings of the border every day.

San Diego is considered a bi-national city by many who live and work on opposite sides of the border, and about a third of the city’s population is Latino.

During Trump’s speech, some protesters outside the convention center scaled a barrier and lobbed water bottles at police. One man was pulled off the wall and arrested as others were surrounded by fellow protesters and backed away from the confrontation.

After the convention center emptied, clusters of Trump supporters and anti-Trump demonstrators began to mix in the streets, with many exchanging angry words and some throwing water bottles at one another. 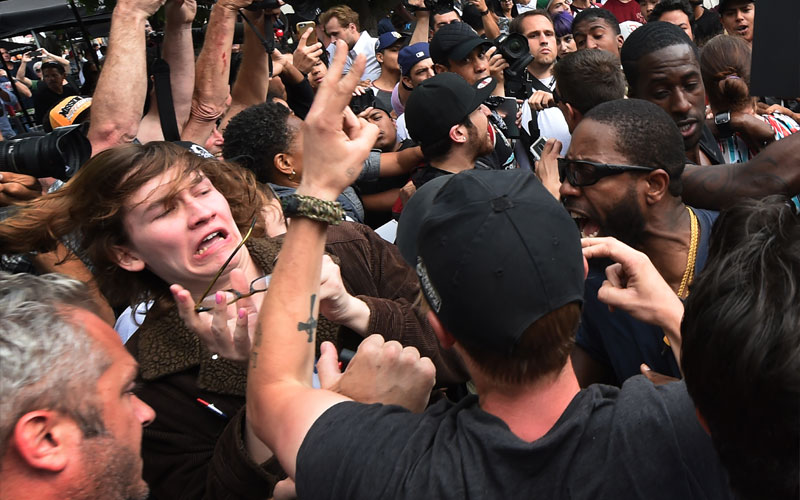 Police in riot gear declared the gathering an unlawful assembly and ordered the crowd to disperse, herding the crowd out of the city’s hotel and restaurant-filled Gaslamp Quarter.

San Diego police said on Twitter that 35 arrests had been made during the protest. However, no property damage or injuries were reported, police said.

“Fantastic job on handling the thugs who tried to disrupt our very peaceful and well attended rally,” Trump tweeted to police afterwards.

The controversial Republican nominee has long been accused of thinly-veiled racism in his statements about American immigration policy and the countries trade relations with neighboring Mexico.

However, since securing the Republican nomination, Trump has toned his rhetoric against Latinos down considerably, a move that some observers believe is a bid to appeal to swing voters and independents who are hesitant to vote for presumptive Democratic nominee, Hillary Clinton.

Earlier this month, Trump released a celebratory tweet of him eating tacos, a traditional Mexican dish, on Cinco de Mayo, a celebration of Mexico's unlikely victory over French forces at the Battle of Puebla on May 5, 1862, under the leadership of General Ignacio Zaragoza.