‘Shame for PML-N’: Nawaz lashes out at Ahsan Iqbal for mishandling Islamabad sit-in 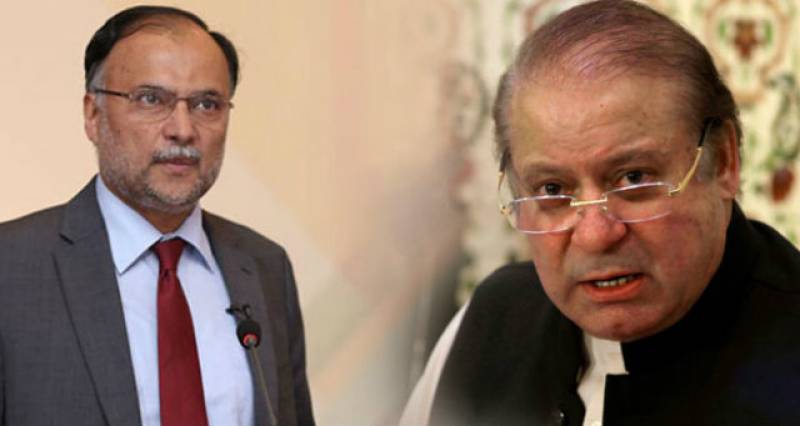 ISLAMABAD - Ousted prime minister Nawaz Sharif on Tuesday lashed out at Interior Minister Ahsan Iqbal for not properly handling the Faizabad sit-in, saying the agreement between the government and the protestors ‘a shame for us (the government)’.

“If the only solution was the resignation of law minister, the government should have taken it by itself; the way Zahid Hamid's resignation was taken brought shame and failure for the government,” Nawaz said while grilling Ahsan Iqbal during a meeting in Punjab House in Islamabad.

Ahsan Iqbal briefed the former PM about talks and agreement with Tehreek-e-Labbaik protesters but Nawaz Sharif appeared unsatisfied with interior minister’s performance. Nawaz said that the sit-in was not handled in a proper manner which is tantamount to a failure of government, sources closed to the development told Daily Pakistan.

Other PML-N leaders also expressed disappointment over the role of political parties during the sit-in and lamented that government had to sacrifice law minister due to non-cooperation of other parties.

Talal Chaudhry, junior minister for Interior, said that protestors succeeded while the government remained failed to control the situation, the sources added.

Former interior minister, Chaudhry Nisar Ali Khan also held a one-to-one meeting with Nawaz Sharif expressing displeasure over the statement of Ahsan Iqbal. He demanded an enquiry into Iqbal’s allegations levelled against him.

Nisar openly talked with Nawaz about party affairs and national political scene and expressed his reservations, according to the party sources.

The ex-law minister clarified that neither firing was carried out from his house nor anybody died there. Nawaz assured Nisar to dispel his reservations.

Later in the evening, talking to PMN-N workers, Nawaz Sharif argued that the judicial decision against him was against the facts and people did not accept it. “Party workers and people of Pakistan are standing with me, soon we will make a pledge for development of Pakistan,” the PML-N president said.

Nawaz Sharif during his speech affirmed to launch political struggle along with workers and political parties for democracy and safety of the system.

“Pakistan's biggest court is people’s court which will decide our fate next year,” Nawaz added.