BANvPAK: Tigers take 44 runs lead in first Test as Green Shirts all out for 286 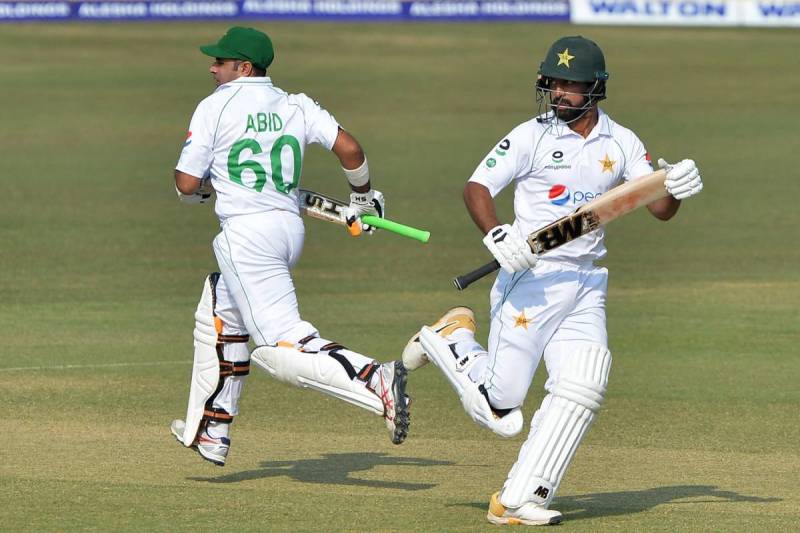 DHAKA – Bangladeshi left-arm spinner Taijul Islam's striking figures of 7 for 116 shot down Men in Green for 286 and helped the hosts bag a crucial 44-run first-innings lead at the end of the second session on day three.

Babar-led squad started the day at 145 for no loss and was able to add 83 in the session for the loss of six wickets while astonishing bowling by 'wounded' Tigers dismissed the visitors for 286.

Taijul, 29, took seven wickets and was the main player in providing Bangladesh lead of 44 runs in the first innings.

Earlier, Green Shirts looked set for a big total, but the debutant Abdullah Shafique trapped on leg-before in the fifth ball of the day. Taijul then dismissed seasoned player Azhar Ali for a duck on the next ball when the delivery hit him on the foot.

Fourth Test century for @AbidAli_Real the highlight of the day for Pakistan as the visitors are bowled out for 286 in their first innings on day-three of the Chattogram Test.
Bangladesh take 44-run first innings lead. #BANvPAK #HarHaalMainCricket pic.twitter.com/IqcmAsdnVz

Bangladesh then bagged the third wicket of Fawad Alam at 8 and the visitors were 203/4 at lunch with Abid Ali batting at 113.

Following the dismissal, Ebadat Hossain batter Rizwan after Lunch while Taijul continued his dominance by trapping Abid Ali for leg-before.

Hasan Ali then came to bat in an aggressive mode but was sent back to stands after scoring eight-ball 12. Sajid Khan (5) was clean bowled by Ebadat to rate further trouble for the hosts.

DHAKA – Pakistani pacer Hasan Ali managed to take five wickets as hosts were dismissed for 330 in its first ...

Nauman Ali managed to score 8 as Tigers trapped him in front. He reviewed straightly but the ball hit the pad first. All-rounder Faheem Ashraf added crucial runs while Shaheen Shah was steady from the other end during the last wicket stand.

Faheem scored 38 off 80 balls after he got a thin edge while executing a sweep off Taijul. Shaheen remained not-out on 13.