Section 144 imposed around Karachi's Nasla Tower amid protests against demolition 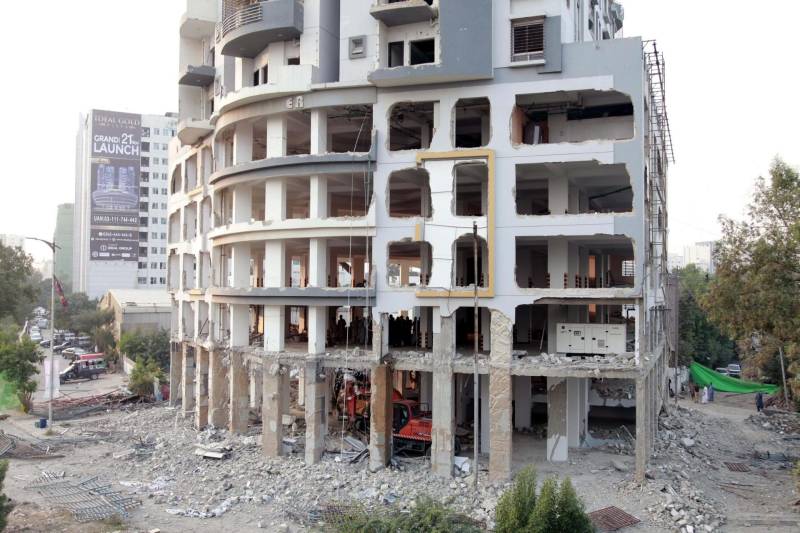 KARACHI – Administration of the country’s largest metropolis has imposed Section 144 in the vicinity of Nasla Tower in a bid to thwart any protests by the residents of the illegally constructed building.

Reports in local media said Section 144, which restrict the gathering of four or more people at the surrounding of and inside Nasal Tower, was imposed on the directives of provincial authorities.

Earlier, law enforcers resorted to baton-charge and fired tear gas on residents and builders protesting outside the 15-storey residential building located at the intersection of Sharea Faisal against the building's demolition on the country’s top court orders.

A notification has been issued by the Home Ministry which stated that area residents may turn violent during the demolition and therefore, the gathering of more than four persons will be prohibited in the locality. Strict action will be taken against those who interrupt the demolition process, it said.

The provincial administration is on alert after area residents turned aggressive when the demolition started.

Two heavy machines weighing 14 tonnes are working to demolish the building while around 400 labourers are working round the clock to accomplish the task.

In a similar development, the apex court has ordered the Karachi commissioner to double the number of labourers and demolish the Nasla Tower within one week.

Earlier, the Chairman of Association of Builders and Developers ABAD, asked holding the concerned government departments accountable as the entire building was not constructed in a day.

Sindh Chief Minister and Chief Secretary should also be held responsible for the state of affairs and urged them to sit with them and collectively take steps for improvement of country’s financial capital, he added.