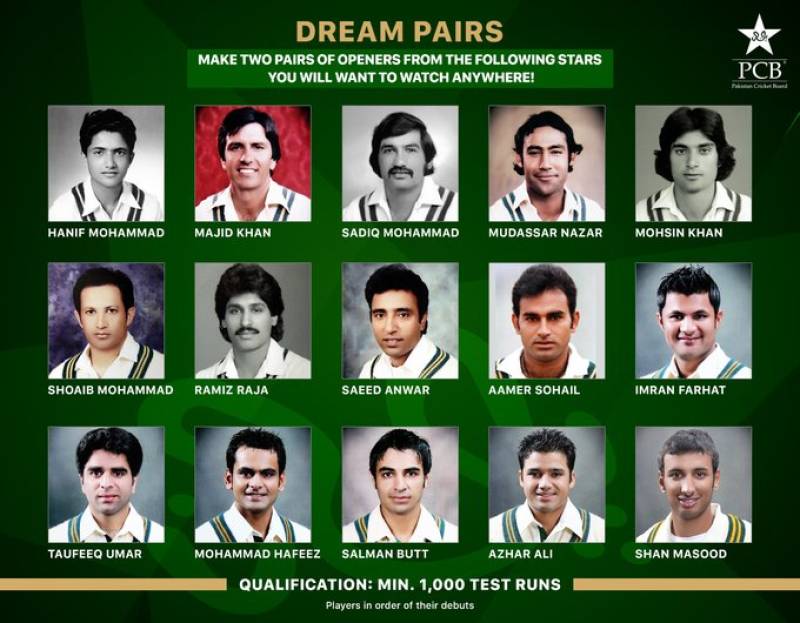 LAHORE – The Pakistan Cricket Board (PCB) brings an exciting opportunity for the fans to come up with their favourite combinations in the Dream Pairs campaign, which commenced today.

Fans are invited to jot down their favourite batting (opening and middle-order) and bowling (pace and spin) pairs from different generation of cricketers who donned Pakistan’s golden star in Test cricket on the PCB’s Facebook, Instagram and Twitter platforms. Towards the end of the campaign, the fans will also be asked to vote for a wicketkeeper who they would want to watch.

Pakistan has produced some of the greatest cricket stars and legends who have gone on to make a mark on the most prestigious format of the game. The players have been shortlisted on the basis of number of runs – that they have scored on certain positions – and the number of their wickets.

The criteria is below:

Looking ahead to the campaign, Mohammad Yousuf, who scored 24 Test centuries in his career, said here : “This is a brilliant initiative by the PCB which not only makes our young and energetic fans aware about the legends of the game but also gives them something to engage with in these testing times when we all are required to stay home.

Babar Azam, who has scored a century in his each of his three Test matches in Pakistan, said: “Pakistan has produced some of the best Test batsmen who have been equally good against pace and spin in home and away conditions. Amongst such an outstanding bunch of batsmen, it would be a tough call for the fans to choose their best pairs.

“My favourite pair comprises Mohammad Yousuf and Younis Khan. This generation of cricketers have learned a lot from Yousuf bhai’s skill and class and Younis bhai’s ‘never give up’ mind-set and we will continue to learn from them.

“Now, I want to know which are our fans’ favourite pairs and why.”

Saeed Ajmal, who brought Test victories for Pakistan with his crafty spin, said: “It is often said that bowlers hunt in pairs and that is something we have seen on the field. I have had the opportunity to bowl with some of the most extraordinary spinners that my country has produced and we were able to record a number of wins for Pakistan together.

“But, if you ask me, I would have loved to have bowled with the legendary Abdul Qadir. He was a great leg-spinner and possessed a remarkable googly. And, I had a doosra in my arsenal. So, ours would have been a great pair.”