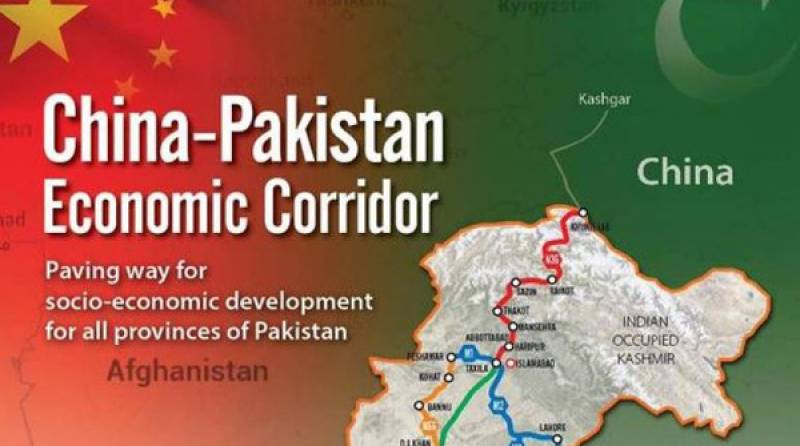 ISLAMABAD – The Embassy of China in Pakistan Saturday contradicted a news item appeared in a section of press which had claimed that Pakistan would repay $40 billion debt to China under the China-Pakistan Economic Corridor (CPEC).

“This number of $ 40 billion is wrong and misleading. The CPEC is a major and important economic cooperation project between China and Pakistan. All CPEC projects are based on consensus of the two countries, and fully comply with relevant laws and regulations,” said a statement issued by the Chinese embassy.

According to the embassy, currently, 22 early harvest projects under the CPEC had been completed or were under construction, with a total investment of $18.9 billion. These projects aim at resolving two major bottlenecks hindering economic development of Pakistan, namely lack of transportation infrastructure and energy shortage.

Clarification on CPEC:
“To date, 22 projects are progressing in various stages of implementation. Govt of Pakistan financial liability is only to the tune of US$6 billion comprising of low interest loans & grants in infrastructure projects spread over 20-25 years payback period.” pic.twitter.com/FBZB6kgLKV

Explaining the financing details of 22 projects, the embassy said the Chinese government provided concessional loans of $5.874 billion for Pakistan Government’s major transportation infrastructure projects, with a composite interest rate of around 2% in repayment period of 20-25 years.

The Pakistani government provides sovereign guarantee for the above loans and would start the repayment from 2021.

Secondly, the Chinese companies and their partners invested $ 12.8 billion in energy projects in Pakistan. Among them, Chinese companies provide $3 billion from their own equity. The rest $9.8 billion is raised from commercial banks with interest rate of about 5%. The repayment period is 12-18 years.

“All the CPEC energy projects are investment in nature, which is purely independent business behavior of these companies. The companies are responsible for their own profits and losses and repayment of loans. The Pakistani government does not repay these loans under CPEC,” the statement said.

The business cooperation between the two sides is in full compliance with internationally accepted business practice, it added.

Moreover, the Pakistan Government provided funding for the feasibility study of ML-1 upgradation.

“Therefore, Pakistan will repay only $6.017 billion (Category I $5.874 billion and Category III $0.143 billion) and their interests to China. China and Pakistan are discussing how to use Chinese grant to implement new projects such as new Gwadar international airport, Gwadar vocational training center and friendship hospital, etc.,” it said.

ISLAMABAD - Pakistan on Thursday said China-Pakistan Economic Corridor (CPEC) had no hidden implications against any ...

According to the embassy, during Prime Minister Imran Khan’s visit to China in November this year, the two sides reaffirmed their commitment to the CPEC, and agreed to ensure the normal operation of the completed projects and the smooth completion of the on-going projects.

The two sides also agreed to consult with each other on the future path and direction of CPEC, taking consideration of Pakistan’s priority of economic and social development and the demand of Pakistani people.

On December 20, China and Pakistan successfully held the 8th JCC meeting of CPEC in Beijing and decided to set up a social economic joint working group under CPEC. The Chinese side will provide more support to the people's livelihood projects such as education, agriculture, poverty alleviation, health care and vocational training.

Both sides signed an MOU on industrial cooperation, and agreed to jointly promote the construction of Special Economic Zones. The CPEC has entered a new phase of broadening and expansion in the next 5 years.

The Chinese Embassy appreciated the Pakistani people for their support on CPEC and welcomed the supervision from all works of life.

“We are willing to join hands with Pakistani friends to nourish CPEC and create a favorable environment for cooperation. We believe that CPEC, as an important project for China-Pakistan all-weather cooperation, will not only help Pakistan to ease energy load shedding, improve infrastructure connectivity, promote economic growth, but also benefit the people of Pakistan and make an important contribution to the building of China-Pakistan Community of Shared Future,” the statement added.