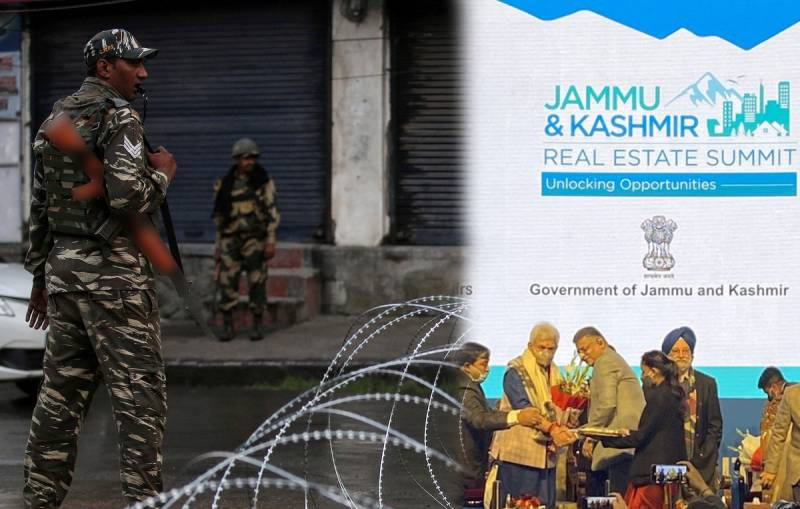 SRINAGAR – Hurriyat leaders and Kashmiris slammed BJP led government for putting IIOJK up for sale as a real estate summit was organized to encourage outsiders to buy land in the 'caged valley'.

Oppressed residents termed the Modi government’s move as a land grab to dilute the Muslim-majority character of the region, whose partial autonomy was scrapped in an illegal move in August 2019.

The Hindu nationalist government has also enacted a series of new laws and changed the existing one which allows non-Kashmiri residents to buy land in occupied Kashmir.

Recently, BJP and state administration held a real estate summit in the region to accelerate investment. Around 39 MoUs were signed at the Real Estate Summit 2021, in which around half of the agreements were related to the residential sector, eight were for commercial projects and four were for hospitality.

The Govt signed 39 MoUs worth Rs 18,300 cr for investments in residential, commercial, infrastructure and film sectors to foster the growth & development at first-ever ‘Real Estate Summit, 2021'.

Despite all the measures by incumbent authorities, land sales in the region are not picking up the pace.  India’s minister of state for home affairs revealed that only seven plots of land have been purchased in the region by non-residents since laws were amended.

“J&Ks special status was illegally revoked to dehumanise, dispossess & disempower the only Muslim majority state in India. GOIs brazen loot and sale of our resources shows that the sole motive is to annihilate our identity and change the demography,” she wrote in a recent tweet.

J&Ks special status was illegally revoked to dehumanise, dispossess & disempower the only muslim majority state in India.GOIs brazen loot & sale of our resources shows that the sole motive is to annihilate our identity & change the demography. https://t.co/MhYXEEWixY

Omar Abdullah also lambasted authorities saying ‘once again the true intentions of the government are brought to the fore. While offering to secure the land, jobs, domicile laws and identity of the people of Ladakh, J&K is being put up for sale. People of Jammu should beware, ‘investors’ will buy up land in Jammu long before Kashmir.

SRINAGAR – Naifa Altaf, the 13-year-old daughter of a Kashmiri businessman, who was killed by Indian forces ...