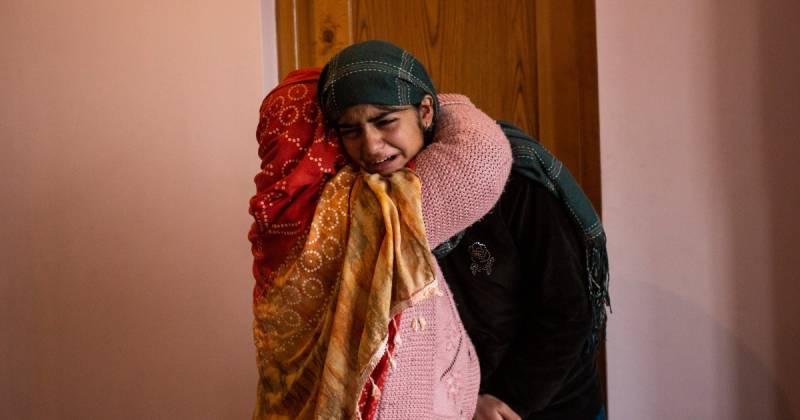 SRINAGAR – Naifa Altaf, the 13-year-old daughter of a Kashmiri businessman, who was killed by Indian forces during an encounter on Monday night, shared her ordeal in a viral clip.

In the short clip, which is doing rounds on social media, the heartbroken daughter tearfully describes the moment she learned about the death of his father.

“My uncle started crying after he got a call around 10 am, she said while adding that she was at home and ran away after hearing the commotion.

She went on to say one of my cousins, who is a witness, told me that my father was picked up thrice and was released twice but the third time he was killed.

The young girl grows more and more distraught as she shares her story. ‘I tell them, uncle, how can you think my father is this...They laugh at me - what response can I give them? They were laughing...They were shamelessly laughing at me. What could I say to them”, she added.

"The Army Man Were Laughing": Girl Sobs On Video Over Father's Killing In Srinagar
Mohammad Altaf Bhat, a businessman, shot death at a commercial complex in Srinagar. pic.twitter.com/1t8zaJJ9d0

The distressed girl also mentioned that her mother is not well as she is not eating and is in shock over the cold-blooded murder.

The families of the slain claimed that both businessmen were killed purportedly by Indian security forces. The law enforcers also refused to hand over the dead bodies citing law and order problems, the family alleged.

On the other hand, Indian forces said the encounter in Hyderpora locality in the region’s main city was conducted on a tip-off about the presence of rebels.

Police claimed that they killed businessman Altaf Ahmad Bhat, 48, who owned the shopping center, and Mudasir Gul, 40, a dental surgeon who was also into real estate.

Families of at least three of those martyred and witnesses to the killings rejected the claims of law enforcers saying two civilians were used as ‘human shields’ during the encounter.

Meanwhile, Hurriyat leaders and Mehbooba Mufti have raised questions over the encounter in the provincial capital.

Mufti, who has been placed under house arrest till further orders, called the killings a part of New Delhi’s ‘new rulebook’. Pakistan also condemned the extra-judicial killing of Kashmiris by Indian occupation forces in the Kulgam area.