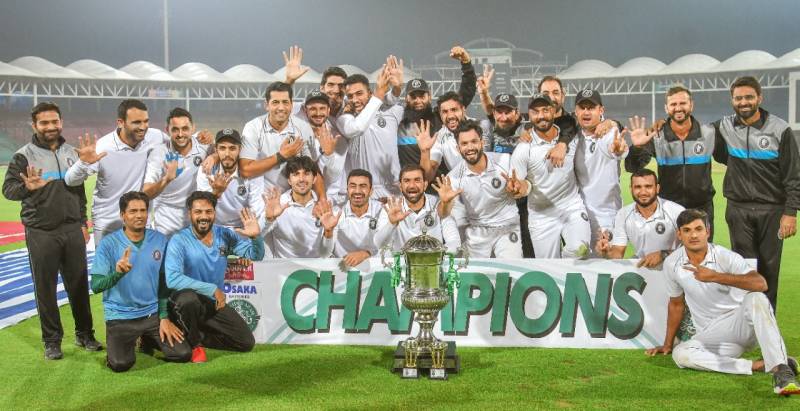 KARACHI – Khyber Pakhtunkhwa have done it again – retaining the prestigious Quaid-e-Azam Trophy with a resounding 169-run victory over Northern in the five-day, day-night final for the 2021-22 edition at the National Stadium, Karachi on Wednesday.

Muhammad Huraira got Northern, who set a 384-run target on the final day, off to a flying start in their monumental chase. The right-hander made history when he scored the seventh run of his innings as he surpassed Khyber Pakhtunkhwa’s Sahibzada Farhan tally of 935 runs in the tournament, setting a unique record of topping the batting charts in his maiden first-class season.

However, they went down fighting as they were bowled out for 214 in their second innings with 18.4 overs left in the final session of the match.

Huraira was later adjudged the best batter of the tournament. The Sialkot-born played a series of delightful shots in his 57 off 49 balls (six fours).

Let's congratulate the top performers from The Quaid-e-Azam Trophy 2021-2022. Who's performance had you on your toes?
Player of the match: Iftikhar Ahmed
Best Batter: Mohammad Huraira
Player of the tournament: Mubasir Khan
Best Wicketkeeper: Rohail Nazir pic.twitter.com/dCQSGQpxpC

Mubasir Khan, who was later adjudged the player of the tournament for his all-round contributions for Northern was the last player dismissed with a delighted Khyber Pakhtunkhwa captain Iftikhar Ahmed taking his catch off off-spinner Sajid Khan.

Iftikhar who was later declared the player of the match for his all-round efforts in the final, took two wickets with his off-spinners while Mohammad Wasim Jnr took two wickets for 38 runs.

Earlier, resuming their second innings with a 270-run advantage, Khyber Pakhtunkhwa succeeded in taking their lead to 383 courtesy Rehan Afridi’s 79 and Sajid Khan’s valuable 39-run contribution in the lower-order.

Afridi who was unbeaten overnight, reached his 50 today. He was dismissed for an enterprising 79 off 110 balls (eight fours, one six). Sajid used the long handle effectively in his 39 off 48 balls (two fours, two sixes).

Star players took to social media to praise KPK on their conseutive victory.

Another huge title for KP. Absolutely thrilled to be the part of this champion team. Much praises for entire team, coaching and support staff. Hard luck Team Northern. You played well. #NORvKP #QeAT pic.twitter.com/lurZGjPNP1

Congratulations Khyber Pakhtunkhwa for winning the prestigious Quaid-e-Azam Trophy 2021-22. This is the result of sheer hard work and selfless efforts from everyone involved. Huge shout out to support staff, coaches and every single team member. #NORvKP #QeAT 🏆 pic.twitter.com/5U1HVWyvkc

DUBAI – ICC on Tuesday announced the nominees for the Men's Test Player of the Year 2021 award, Pakistani fans ...