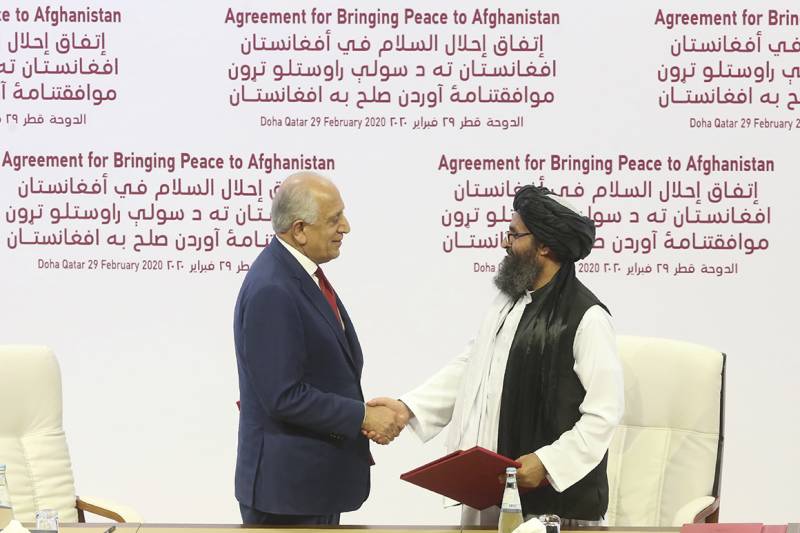 DOHA - The United States and Taliban on Saturday signed a much-awaited peace deal in Qatar to end the 18-year long war in Afghanistan.

The US Special Representative for Afghanistan Reconciliation Zalmay Khalilzad and representative of Taliban Mullah Abdul Ghani Baradar signed the agreement.

The signing ceremony was witnessed by Qatari Emir, US Secretary of State Mike Pompeo, Foreign Minister Shah Mahmood Qureshi and his counterparts from seven countries and representatives from fifty countries. 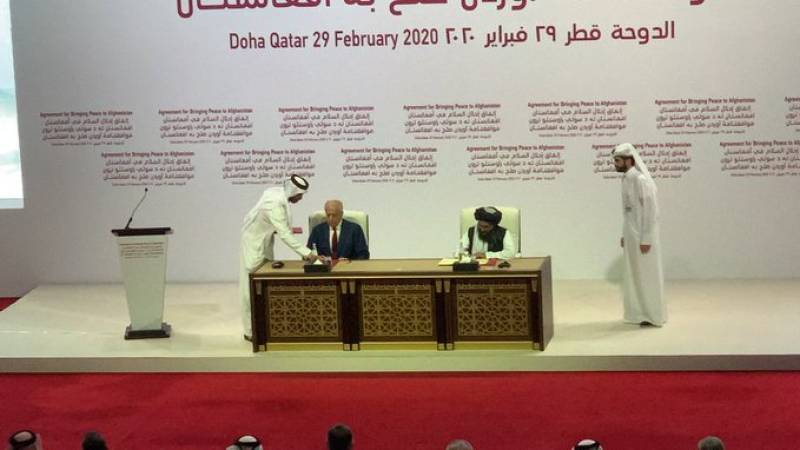 Speaking on the occasion, Leader of Taliban delegation Mullah Abdul Ghani Baradar expressed full commitment to the agreement by his side.

He said as a political force we want to maintain positive relations with all neighbors, regional countries and international community who played a key role in this agreement.

Mullah Abdul Ghani Baradar said we want unity and prosperity of our country and for this reason I call upon all factions to make this deal working.

He especially thanked Pakistan for its assistance and support in making the deal success.

He also appreciated the role of China, Russia, Iran, Uzbekistan, Norway, Indonesia and other countries in supporting the peace process.

US Secretary of State Mike Pompeo in his address said the agreement is true test of the effort to give peace a chance.

He said it will ensure that Afghanistan never becomes a base of terrorists again.

Mike Pompeo said reduction in violence is not perfect, but at least Taliban demonstrated that when they have the will to be peaceful, they can be.

Appreciating the US Representative for Afghanistan Reconciliation Zalmay Khalilzad, he said he played a critical role in making the negotiations successful.

He urged Taliban to sit with Afghan government to determine the course for future of Afghanistan.

#Live: Signing ceremony of peace deal between Afghan #Taliban and US in #Doha. #AfghanPeaceDeal https://t.co/mrzUrNPSCb

Earlier, Qatari Foreign Minister Mohammed bin Abdulrahman bin Jassim Al Thani said the signing of this agreement became possible after phased negotiations and this will lead to the withdrawal of US forces from Afghanistan.

He said the state of Qatar, its leadership and people are pleased to witness the signing of peace agreement that will lead to fruitful and successful relations between the two sides.

Within the first 135 days of the deal the US will reduce its forces in Afghanistan to 8,600, with allies also drawing down their forces proportionately.

The move would allow US President Donald Trump to show that he has brought troops home ahead of the US presidential election in November.

The deal also provides for a prisoner swap. Some 5,000 Taliban prisoners and 1,000 Afghan security force prisoners would be exchanged by 10 March, when talks between the Taliban and the Afghan government are due to start.