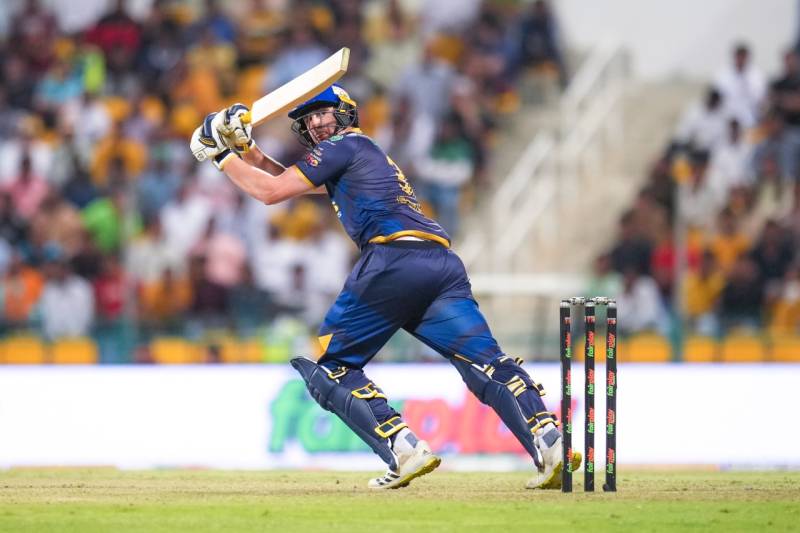 Deccan Gladiators piled up a whopping 140 for 2 through Tom Kohler-Cadmore and Nicholas Pooran whipping Delhi Bulls’ attack. Delhi Bulls fought back valiantly to score 122 for 4 in 10 overs but they lost by 18 runs in the in the third match on the fifth day of the Abu Dhabi T10 at the Abu Dhabi Zayed Cricket Stadium on Sunday. A total of 262 runs were scored in a run riot match.

Delhi Bulls won the toss and elected to field. They earned an early success when Imad Wasim had the dangerous Jason Roy out with the last ball of the first over for 5. Wasim had Jason stumped by wicketkeeper Tom Banton when Roy came down to play across the line and missed the delivery.

Deccan Gladiators’ skipper Nicholas Pooran and Tom Kohler-Cadret hen  took charge. Kohler-Cadmore hit Waqas Maqsood for a six and a boundary. In the third over, Pooran hit a huge six off Imad Wasim’s last delivery. Richard Gleeson too was not spared being hit for two boundaries in the fourth over. The fifth over from Dominic Darkes was fully utilized by both the batsmen. While Pooran hit the first ball of that over for a six, Kohler-Cadmore hit two consecutive boundaries off the third and fourth ball. He also hit the fifth delivery for a six to take 22 runs off that over. Keemo Paul who bowled the sixth over was also punished with Kohler-Cadmore hitting the third ball for a six to square leg, fourth for a boundary to deep point, and the fifth for another six over extra cover. Eighteen runs were picked off that over.

Shiraz Ahmed was introduced for the seventh over, hoping for a breakthrough. Kohler-Cadmore did not spare him too and smashed him for a six over long on while Pooran picked a boundary to fine leg. They took the team to the 100 run mark in seven overs. The massacre of the bowling attack continued in the eighth over when Richard Gleeson was pulled for a six by Kohler-Cadmore and Pooran completed the over with two consecutive boundaries. After Maqsood was hit for two consecutive boundaries in the ninth over by Kohler-Cadmore, the quick innings from Pooran ended. He fell to the fourth ball of Maqsood after scoring 34 off 17 balls with two sixes and three boundaries caught by Keemo Paul at deep square leg.

Andre Russell too joined the six hitters by lifting Shiraz Ahmed for a huge six over extra cover.  Deccan Gladiators thus posted a mammoth 140 for 2 in 10 overs. Kohler-Cadmore remained unconquered on 82.

Unfortunately, Delhi Bulls began on a wrong note. They lost opener Rahkeem Cornwall to Josh Little’s fifth delivery of the first over, clean bowled for 2. Tom Banton picked two boundaries off the first two delivers of the second over from Andre Russell to take 12 runs  off that over. David Wiese, well known for his ability to bowl tight overs, had Banton out with a tricky slower delivery. Banton was committed to hit straight to Kohler Cadmore for 12. Wiese gave away just eight runs.

UAE pacer Zahoor Khan bowled a tight fourth over giving away no boundaries. Though Rilee Rossouw hit Tom Helm for a six to long-on, only 11 runs came off the fifth over. So at the half way mark, Delhi Bulls had scored only 47 for 2 with the required run rate shooting up to 18.80. Tim David turned  aggressive in the sixth over and hit Sultan Ahmed for a six off the first ball to midwicket. Rossouw too hit Sultan for a six to long on.  David hit the fifth delivery for another six and he ended the over with another four. Twenty-nine runs came off that over. This carried the score to 76 for 2 and the required run rate dipped to 16.25.

Zahoor once again bowled a fine seventh over giving away just eight runs. With 56 runs needed off the last over, Delhi Bulls found their hopes fading away. David continued to hit Helm for a boundary and a six in the eighth over and took 20 runs off that over.

This resulted in Delhi Bulls needing a gettable 37 runs from 12 balls. Russell who bowled the ninth over got the dangerous David out, brilliantly caught by Suresh Raina at extra cover running to his left. David’s 48 came off 24 balls with three boundaries and four sixes. Keemo Paul walked in and hit the first ball he faced for a boundary to mid-wicket.  The fifth ball too was sliced by Paul to third man.

With 23 runs needed from six balls, Little got Rossouw out for 28, caught by Roy at mid-off.  Rossouw’s knock off 15 balls had one boundary and two sixes. This ended Delhi Bulls’ challenge too.

Player of the Match: Tom Kohler-Cadmore