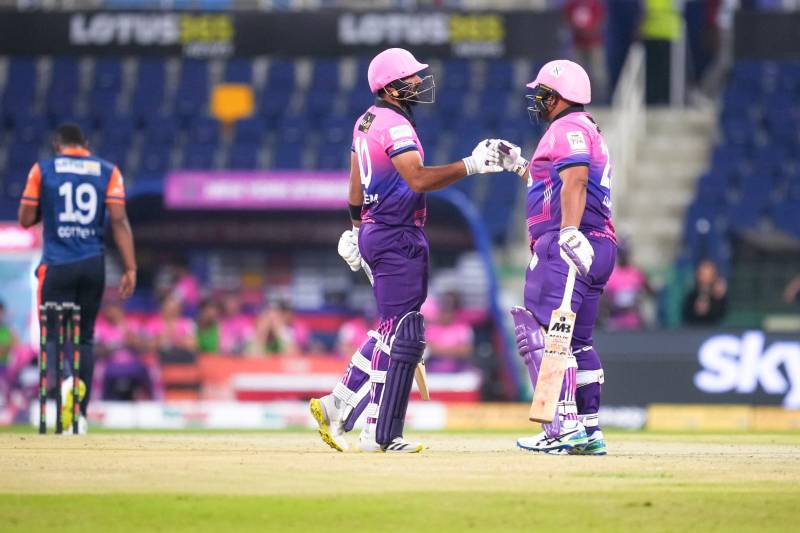 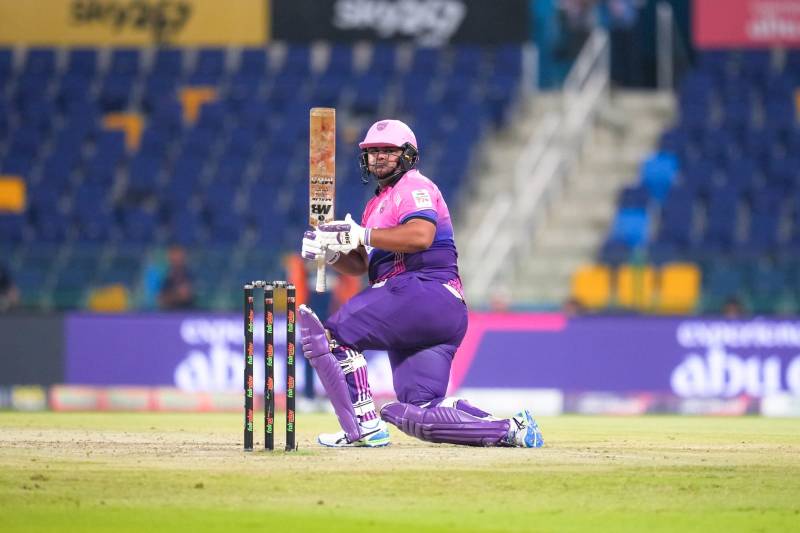 New York Strikers snapped Morrisville Samp Army's three match winning spree by pulling off a 12 runs win in the 15th match on the sixth day of the Abu Dhabi T10 at the Abu Dhabi Zayed Cricket Stadium on Monday. The battle of the two debutants to this tournament was intense with New York Strikers posting 110 for 8 through Azam Khan’s 47 and Paul Stirling’ 34. Samp Army were restricted to 98 for 5 despite skipper Moeen Ali’s fighting knock of 42.

Morrisville Samp Army had won the toss and elected to field. New York Strikers’ opener Paul Stirling got  the first boundary of the day through an outside edge off Sheldon Cottrell’s fifth ball to the third man region. The last ball of that over too got him a boundary when he placed it past the point fielder.

Stirling was severe on UAE’s Ahmed Raza who bowled the second over. He hit him for two consecutive boundaries off the second and third ball. He also hit the fourth and sixth ball for sixes to take 21 runs off that over. Opener Andre Fletcher did not get going and fell to the last ball of the third over from Anrich Nortje for 8 when his edge flew to Dwaine Pretorius at third man boundary.

Pretorius who then came on to bowl the fourth over had Stirling caught behind by wicketkeeper Johnson Charles of the fourth ball for 34. His 13 ball knock had five boundaries and two sixes.

Then Eoin Morgan and Azam Khan began to score freely. Morgan hit Chamika Karunaratne for a boundary through the covers and a six off the third ball to deep square leg. Azam khan too scored a boundary to long-on and take 15 runs off that over. With the score reading 64 for 2 at the half way make, Karim Janat bowled a brilliant sixth over. He had Eoin Morgan caught by David Miller at long on and with the very next ball had skipper Kieron Pollard caught behind by Charles. Janat gave away just two runs and took two wickets.

Azam Khan rose to the challenge and hit Cottrell for two consecutive sixes of the first and second deliveries of the seventh over. The first six was hit to long-on and second one to backward square leg. Azam also hit the fifth ball for a boundary to fine leg to take 16 runs off that over.

Pretorius, as usual, bowled tight and had Muhammad Waseem caught by Karunatatne for 1 with the third ball and clean bowled Jordan Thompson with the next delivery. Only four runs came off that over besides the two wickets.  New York Strikers slipped to 86 for 6 with only two more overs to go.

Azam Khan continued to hit hard and scored a six off Nortje’s first delivery of the ninth over to mid-wicket. He also hit him for a boundary off the next. The third delivery was also hit for a six and the score went past the 100-run mark. Azam Khan fell to the fifth delivery when Nortje trapped him leg before for 47. His knock off 21 balls had three boundaries and five sixes.

The last over was bowled by Janat. He picked his third wicket by having Wahab Riaz out with the second ball caught by Shimron Hetmyer at long-on. Janat gave away just seven runs off that over and New York Strikers were restricted to 110 for 8 in 10 overs.

Samp Army began their chase through opener and captain Moeen Ali hitting the first ball of the innings from Akeal Hosein for a boundary to long-on. Hosein gave away only six runs off that over. Off the second over, 12 runs were scored with Moeen Ali hitting Matiullah for two boundaries.

Johnson Charles, who was batting slowly, hit Wahab Riaz past point for a boundary in the third over. Slowly but steadily the openers increased the run flow. Wahab Riaz injured his calf muscle and Muhammad Waseem was called to complete the over. Charles hit Waseem’s sixth ball, which was a no ball, for a six and got seven runs off that delivery. Nineteen runs came off that over.

Skipper Kieron Pollard introduced himself for the fourth over and provided the breakthrough. With the fourth ball he had Charles caught by Muhammad Waseem at deep mid-wicket for 20. David Miller joined his captain Moeen Ali. Paul Stirling, who bowled the fifth over, got the prize wicket of Miller caught by Muhammad Waseem at long on for 2. He gave away just three runs in that over. At the half way mark, Samp Army was 46 for 2, needing 65 runs in the remaining 30 balls.

Jordan Thompson was introduced to bowl the sixth over with Shimron Hetmyer joining Moeen Ali. He bowled a tight over giving away just a boundary off the last delivery to Hetmyer. Stirling’s first delivery of the seventh over was hit straight by Moeen for a boundary but off the next five balls he gave away just singles. With 48 needed off the last 18 balls, New York Strikers began to sense victory.

With 22 runs needed off the last six balls, Moeen Ali smashed the first ball from Rampaul through the covers for a boundary. He only got a double off the next ball. With the third ball, Rampaul clean bowled Moeen Ali for 42. His knock came off 25 balls and five boundaries and a six. With sixteen needed off the last three deliveries, Pretorius could get only two runs off the fourth ball and off the fifth Rampaul clean bowled Pretorius to ensure the victory.

Player of the Match: Paul Stirling.