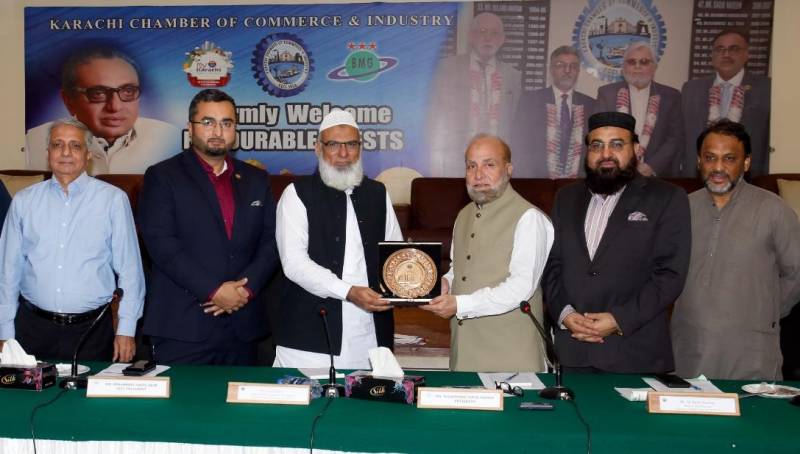 The President, KCCI, Mr. Muhammad Tariq Yousuf welcomed the PCA delegation and appreciated them for visiting the Chamber. He, emphasized to live together and work jointly. He also assured of all possible support to PCA in the development and promotion of coating industry. He suggested, a PCA member could be inducted in their Housing & Construction Committee also PCA can be a member of KCCI. Mr. Tariq Yousuf, also recommended PCA to participate in KCCI’s “My Karachi Exhibition”. He also offered to arrange a single country exhibition through TDAP.

The Chairman, PCA, Mr. Siraj Uddin while addressing the house thanked KCCI officials for extending a warm welcome to his delegation. He thanked Allah and his PCA members to nominate him as Chairman of the association. He also added that business related issues and problems are more or less common among us, hence, suggested to work together for promoting business. Mr. Siraj Uddin was of strong opinion, to believe on their slogan “MAIN NAHI HUM”.

He apprised the house that PCA has signed MOU with LCCI and RCCI, also look forward to sign MOU with the KCCI. To enhance their Membership Drive, PCA plans to visit Balochistan shortly, as they have huge mineral and mining sector, which is also an important component of coating industry, he added. He said PCA is interested to induct their Member from Karachi as nominee in KCCI.

Knowing that Mr. Yousuf is one of the pioneer founder of PCA, also has an indepth knowledge and insights of the industry, as well as the Association, the Chairman, PCA, Mr. Siraj Uddin wanted the floor to be with him for a while, so that he can also come up with serious issues and problems being faced by the industry as a whole and members of PCA in particular.

Mr. Yousuf, further stated that Coating is an export oriented industry, need to be included in O-rated export category. Recently, FTO, Mr. Asif Mahmood Jah was Chief Guest at our Annual Dinner, had constructive discussion on taxation and FBR, he added. Mr. Yousuf, also pointed out a major issues these days being faced by the importers, that documents not being released by the Bank, which results in Demurrage and Detention costs. In response, Mr. Haris Agar, Vice President, KCCI suggested forwarding their complaints in writing to KCCI and they will try to resolve. Mr. Yousuf, also highlighted that income tax on importing basic raw materials was two percent earlier and now extra 1.5 person has been imposed. Mr. Usman Umer, Executive Committee Member, PCA, seconded Mr. Yousuf.

While commenting to be export oriented, suggested that lands in Hawksbay area should be given to businessmen for setting up manufacturing units. Responding to him, President, KCCI, Mr. Tariq Yousuf apprised that 1600  acres industrial zone is coming up soon. He also appreciated the Sundur industrial estate policy on lands and informed that no more resale allowed in the industrial area.

Mr. Badar Haroon, Senior Vice Chairman, PCA, congratulated the newly elected Office Bearers. He desired, with KCCI to form a Coating Committee in the Chamber. Seconding to Mr. Muhammad Yousuf, he said Balochistan is a lucrative market for coating activities. Explaining to the house, he explained that Calcium Carbonate is a part of mining and important factor of coating industry. Mr. Badar, informed the Chamber that PCA was registered with the DGTO in 2021. He expected, KCCI to play the role of bridge between us and the Government.

KCCI, Managing Committee, Member, Mr. Arif Lakhany, while speaking to the house referring to hurdles in importing, was of the opinion to encourage on setting up raw materials manufacturing units, than relying on imports. Mr. Khalid Khanani, Former Senior Vice Chairman, PCA, emphasized on development of infrastructure for the business community.

Those attended the meeting from KCCI were Mr. Muhammad Tariq Yousuf, President,

Finally, vote of thanks was presented by Vice President, KCCI, Mr. Haris Agar and had exchange of mementos and flower bouquets, followed by photo session.