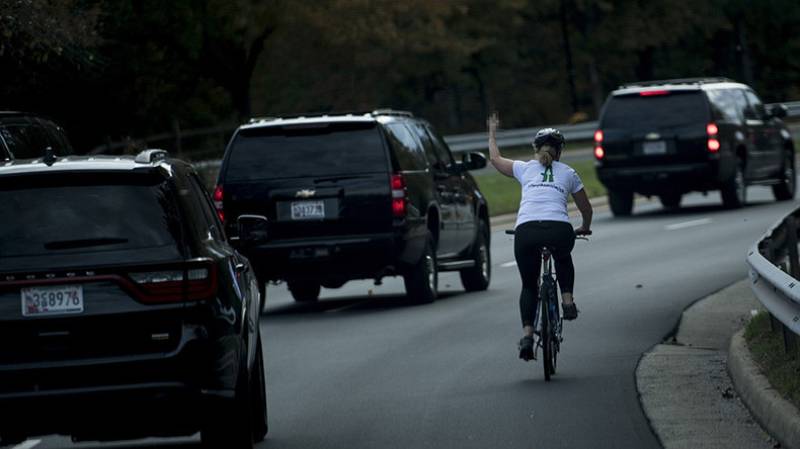 VIRGINIA - We don’t know if Donald Trump looked out of his car as the presidential motorcade left his Virginia resort on Saturday. If he did, he would have been treated to the bizarre sight of a cyclist alongside giving him the middle finger.

The scene in which a female cyclist raised her middle finger in the direction of his motorcade was witnessed by reporters in the presidential pool and captured by a photographer from an international news agency.

I just saw this happen as we left the Trump golf course in Sterling, Virginia. pic.twitter.com/90OSrYPqJk

According to a pool report, the motorcade first encountered two pedestrians who gave it the thumbs down sign as it left the Trump National Golf Club in Virginia.

“Then it overtook a female cyclist, wearing a white top and cycling helmet, who responded by giving the middle finger,” the report read. “The motorcade had to slow and the cyclist caught up, still offering the finger, before turning in a different direction.”

The bird-flipping woman has not yet been identified and no pool footage of the incident has been released.

Trump’s Virginia trip is his 96th visit to one of his properties since the beginning of his presidency, and 76 of those have have been to golf clubs, according to a tracker from NBC.