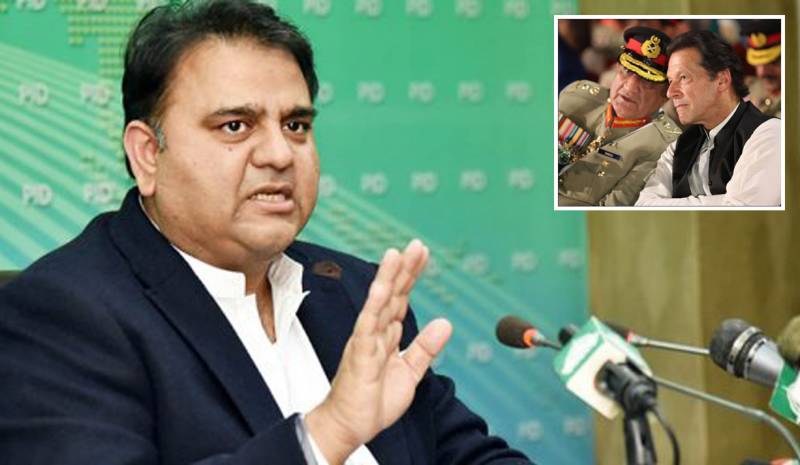 Chaudhry makes revelations as an audio clip between the ousted prime minister and his then principal secretary surfaced online on Wednesday, wherein they were discussing the diplomatic cipher.

Speaking with a local media outlet, Fawad said the top general suggested Imran Khan to debug PM House by using the latest technology, apprising him that it was not safe to hold discussions at the highest office of the land.

Fawad continued saying that Imran Khan was previously told about the secret recordings of conversations. “COAS had said Nawaz Sharif stepped out of PM House when he wanted to talk to him about some key issue," the report further said.

The PTI leader mentioned that Pakistan Army earlier secured its headquarters with the latest technology in previous years. He also quoted an article of leading British newspaper which revealed that the Indian government approached Israeli firm to hack telephones, including that of Imran Khan.

Fawad added that it was not surprising for him if the investigation finds the hacking was carried out from abroad, however he said it is unacceptable for PM Office to be hacked.

He also reiterated his party's demand and questioned why the Sharif-led government and the top court were reluctant to hold an inquiry about it.

Khan in his alleged audio leak can be heard maintaining that the cipher should be released so that the nation could be aware of the conspiracy. He however mentioned playing to the cipher.

ISLAMABAD – The National Security Committee (NSC) on Wednesday approved the constitution of a high-level ...

Cyber experts sound the alarm, saying government and private websites data had been hacked during the last year and is available on the dark web.

Earlier, several audio leaks including PM Shehbaz, his cabinet members, and Maryam Nawaz surfaced after which National Security Committee allowed the formation of a body to investigate the leaks.