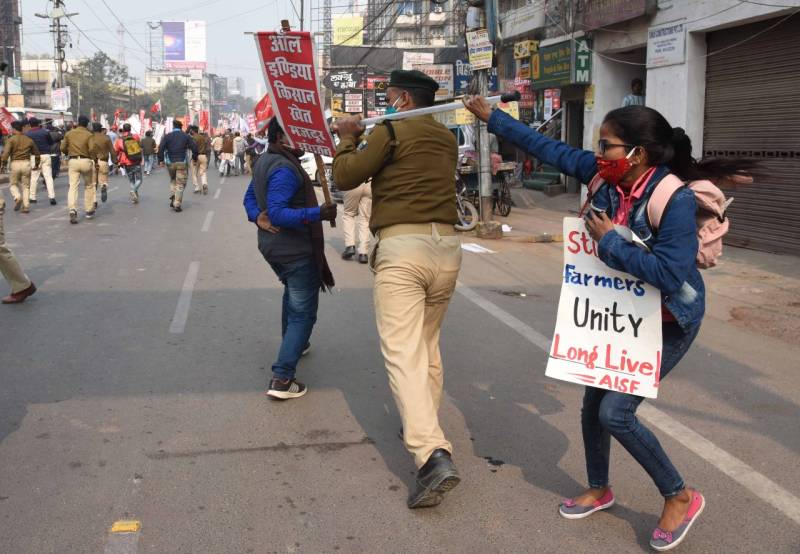 NEW DELHI - Hundreds of women have joined the blockade of key highways leading to New Delhi as the protests by farmers against new agricultural laws continue.

First, it was a trickle - a dozen or two of them, draped in yellow and green scarfs, accompanying a legion of male farmers who arrived each day on the outskirts of the Indian capital.

Then their numbers slowly started to swell.

From students, teachers and nurses to housewives and grandmothers, the women appeared in cars and buses. Some even drove tractors with flags mounted atop bulky metal bonnets that called for a "revolution".

Now, a month into the protests, these women are on the front line, resolutely demanding a rollback of three agricultural laws passed by Prime Minister Narendra Modi's government that farmers fear will favour big corporations and make family-owned farms unviable, eventually leaving them landless.

The highway is their new home, and they are not only forming the backbone of the protests and supporting the men - they're also making their voices heard.

Ramandeep Kaur, a government teacher and generational farmer, is one of the women at the very front column of the protest site that stretches for miles.

She says that while the menfolk blockade New Delhi, women play a vital role in the protest movement too - many by joining the demonstrations, others by single-handedly managing the housework and tending to the fields back home.

On a normal day, Kaur, 45, would spend long hours teaching science in a government-run school in the city of Bathinda in the northern state of Punjab.

At day's end, she would do the household chores and then work on the family farm, feeding the cattle, milking them and turning their dung into fuel cakes.

Nearly 75% of rural women in India who work full-time are farmers, according to the non-governmental organisation Oxfam India, and the numbers are only expected to rise as more men migrate to cities for jobs.

Yet, a little less than 13% of women own the land they till.

After travelling some 340 kilometres (211 miles) to New Delhi, along with her friends, Kaur is now part of an impenetrable army of protesters who have threatened to stay put until their demands to abolish the new agricultural laws are met.

The government says the laws, approved in September, will enable farmers to market their products and boost productivity through private investment, but Kaur argues they were implemented in an "unconstitutional" manner, during the coronavirus pandemic, when proper scrutiny was all but impossible.

The work at the protest site comes with a gruelling daily schedule of 10-12 hours.

During the day, Kaur commands a group of volunteers who make flatbread and curry for thousands of protesters camping on New Delhi's outskirts.

At night, she prepares bedding for dozens of grandmothers who have hunkered down at the protest site, inside trailers and makeshift tents.

Women have taken part in recent protest movements across India.

A core of so-called "dadis", or grandmothers, many from a largely Muslim neighbourhood in New Delhi, were integral to demonstrations against a discriminatory new citizenship law brought by Modi's government in 2019 that culminated in violence.

Protester Sohajdeep Kaur says the demonstrations against the new laws have made the younger generation more interested in protecting their farming heritage.

"The way you need to add bacteria to milk to make curd, this protest is working like that bacteria for us. And when our children grow up, they will be educated correctly and learn how to become a protester," she explains.

The involvement of social-media-savvy young women has shifted the tenor of the current protests.

Many are well-educated daughters of farmers, and they wonder why women shouldn't be on the front lines.

The temperatures in the capital have plummeted to their lowest in recent years, and hygienic sanitation facilities for thousands of female farmers remain a challenge at the protest site.

But regardless, Kaur predicts the protest will go on until the government backs off and withdraws the laws.

"We are confident that we will win," she says.

(Many women at the protest have the last name Kaur as they hail from Punjab and follow the Sikh religion. However, farmers from Haryana state, men and women, have also joined in the protest.)