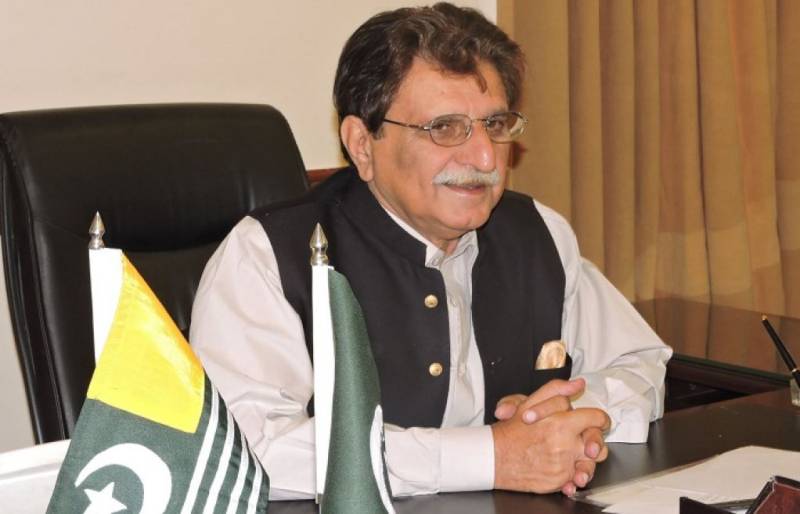 The premier apparently stirred controversy on Saturday by stating  "Will think which country we should be annexed to" in the wake of disqualification of Nawaz Sharif by a five-member bench of the Supreme Court.

ISLAMABAD - Nawaz Sharif can be removed from the premiership but not from the hearts of the public, Azad Jammu and ...

The statement was published by leading newspapers for which Haider faced flak from political observers and journalists across the country.

However, the premier on Sunday clarified that his statement regarding annexation was quoted out of context.

According to a press release issued by the AJK PM House, Raja Farooq Haider denied and condemned the portrayal of his statement about annexation.

"Kashmiris can't even think about any other option except annexation with Pakistan," the statement said.

"The people of Kashmir are struggling for annexation with Pakistan for over 70 years and we had associated our future with Pakistan ever since Quaid e Azam visited Sri Nagar back in 1944," it read.

The premier urged the newsmen to perform their professional duties with utmost care regarding matters of national security.

"Kashmiris consider annexation with Pakistan a part of their faith and it's a matter of life and death for them," the statement added.

Raja Farooq Haider Khan in his statement claimed that he considered Nawaz Sharif as his leader as he mentioned Burhan Wani in his speech at the United Nations General Assembly. He expressed that the whole nation stood by Nawaz Sharif adding that he had concerns about the verdict handed over by the top court.

"Imran Khan is chief of divorce federation as he served divorce twice, divorcing someone is not a sin however, it is the most detested thing out of permissible (matters)," Haider said.

Article 6 must be put into practice on PM AJK for this shameful statement pic.twitter.com/pwa6tDa9SI

Taking a potshot at the cricketer-turned-politician, he questioned whether he was building a Pakistan envisioned by Allama Iqbal, referring to the allegations hurled at him.

Lastly, the premier took strong exception to the unanimous decision by the apex court in the Panama papers case and said: "As a Kashmiri, I need to think to which country I should make annexation to, if this was the country envisioned by Allama Iqbal."

The statement was not only published in Pakistani newspapers, but it made headlines across the border as well.