Obama's dogs have schedules and personal assistants, and they are too busy to meet you 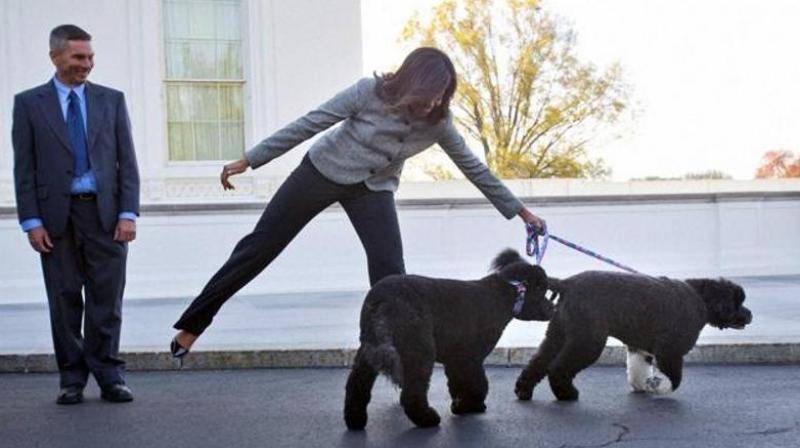 The pair of Portuguese water dogs — Bo with his distinctive white chest and front paws, and the all-black Sunny — are canine ambassadors for the White House, very popular and so in demand that they have schedules, like the president. And both of them are too busy to see you.

“Everybody wants to see them and take pictures,” Michelle Obama said. “I get a memo at the beginning of the month with a request for their schedules, and I have to approve their appearances.”

The dogs have entertained crowds at the annual Easter Egg Roll and Bo is often at Mrs. Obama’s side when she welcomes tourists on the anniversary of the president’s inauguration. The dogs also have cheered wounded service members, as well as the hospitalized children the first lady visits each year just before Christmas. In a sign of just how recognized Bo and Sunny are, authorities in January arrested a North Dakota man who they say came to Washington to kidnap one of the pets, The Washington Post reported.

Bo, now 7, joined the Obama family in April 2009. He was a gift from the late Sen. Edward M. Kennedy, D-Mass., a key supporter of Obama’s 2008 presidential campaign who became close to the family. Bo helped Obama keep a promise to daughters Malia and Sasha that they could get a dog after the election.

Presidential pets are always popular and many presidents kept dogs as companions. President Harry S. Truman famously advised: “If you want a friend in Washington, get a dog.”

President George W. Bush’s Scottish Terrier, Barney, had an official web page and starred in “Barneycam” videos that were filmed from a camera hung around his neck. Like Mrs. Obama, first lady Laura Bush was involved with the video scripts and the taping schedule.

President Lyndon B. Johnson angered animal lovers by lifting his pet beagle, Him, by the ears in front of news photographers.

Obama promised last year to “clean things up a little bit” before leaving the White House in January because the dogs “have been tearing things up occasionally.”

This article originally appeared on the Fox News website.