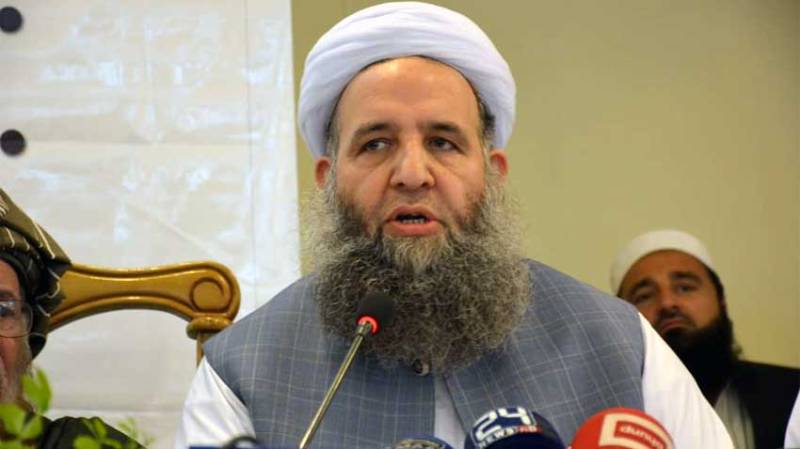 ISLAMABAD – Pakistan's Minister for Religious Affairs and Interfaith Harmony Pir Noor-ul-Haq Qadri said on Saturday that a 12-member committee had been formed to play the role of a mediator between the government and the banned Tehreek-e-Labbaik Pakistan (TLP).

The minister revealed this while talking to the media after Prime Minister Imran Khan held a meeting with religious scholars in Bani Gala.

Qadri said that members of committee were in contact with the government as well as leaders of the proscribed organisation to find a solution to the conflict.

He said that all religious leaders have vowed to resolve the issue peacefully in the larger interest of the country.

The premier told the religious scholars that the PTI government has always supported meaningful and serious talks with the protesters, Qadri said.

He added that the government would consider suggestions from the ulema to avert any bloodshed in the country.

President Dr Arif Alvi has called upon the Ulema to play their positive role in defusing the ongoing tense situation in ...

President of the Sunni Ittehad Council (Faisalabad) Sahibzada Hamid Raza told the media that the premier had assured the participants in the meeting that the government would not use force to curb protests.

He said the premier also vowed not to make any compromise on the writ of the state. Raza asked  the protesters not to head to Islamabad as such moves would undermine the ongoing talks.

The protesters of the banned outfit are currently in Wazirabad where security personnel, including Rangers, have barricaded the roads to stop them from moving forward.

Supporters of the banned TLP launched their protest march eight days ago, demanding release of their top leader Saad Rizvi, who was arrested in April amid similar protests. The banned religious group is also calling for expulsion of the French ambassador to Pakistan over publication of anti-Islam caricatures in France last year.

LAHORE – Pakistan Railways has suspended train service between Lahore and Rawalpindi amid protests by the members ...