Persecution of Rohingyas; Timeline of conflict 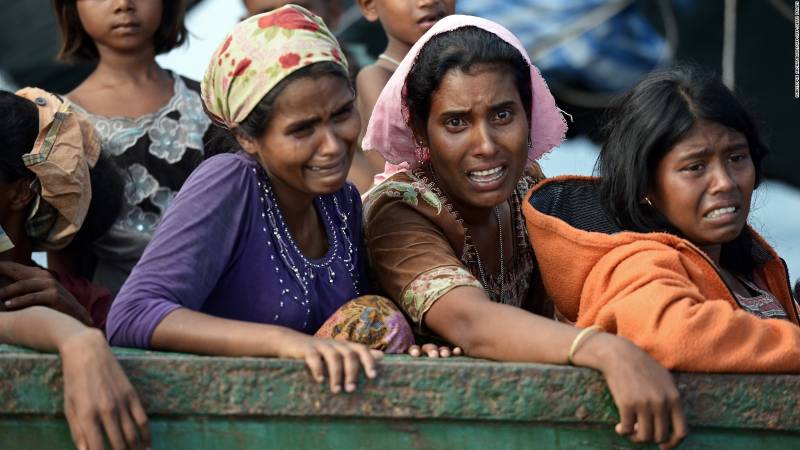 Rohingyas are considered as most persecuted minority in the world. The long turbulent history of Rohingyas, the fact that they are stateless even though they have been living in Rakhine for centuries and oppression by the Myanmar government have made earth hell for the minority.

Rohingyas, over the years, have been subjected to torture, rape, killings, displacement, gang rape and so on…

The recent wave of conflict dates back to World War II. During the World War II, Burma was the front line between the Japanese and the allied forces. Given the religious alliances, the Buddhists and Muslims in Burma were on the opposite sides. The Buddhists supported Japan while Muslims supported allied forces, due to Khilafat Movement. Both communities - to support - their respective side formed armed units and attacked each other. This led to massacre on both sides in 1942-1943.

The first conflict between Rohingya Muslisms and Buddhists dates back to 1784, when Burman king Bodawpay conquered Arakan (Present Rakhine) and Rohingya Muslims fled to Bangladesh to seek refuge.

After the British left, the right to make govt. went to Buddhists. Muslims – in their area of majority – tried to exercise their right to self-determination, and thus, a mujahdin rebellion erupted in April, 1948. These rebels explored the possibility of annexing the Rakhain State to East Pakistan in Bengal but upon the refusal of Pakistan they fought for their right to attain equal rights as full citizens of Myanmar. However, the discrimination of Buddhists officials against Rohingya Muslims worsened the situation for them. Their movement was restricted and some 13,000 Rohingya’s who fled to East Pakistan – now Bangladesh – and India were not allowed to come back.

The revolt kept on going until 1954, when the government launched a massive operation ‘ MoonSoon’, the gorilla fight between the militants and military ended in 1961, through a cease fire. However, the nature of this revolt or rebellion wasn’t that of a ‘terrorist activity’ but merely a freedom fighter movement.

In 1962, military coup in Myanmar resulted in having a more hardline approach towards the Rohingyas. This prompted to re-start mujahdin movment but lack of support of Rohingya Muslisms, forced it to fade away.

In 1974, due to pan-islamist movement around the world, Rohingya Patriotic front (RPF) was formed; the purpose of the movement was to exercise the right to self-determination and to fight for the rights of Rohingya’s. (RPF was split into Rohingya Solidarity organization (RSO) in 1982. The RSO was split and gave birth to Arakan Rohingya Islamic Front (ARIF); both groups formed an alliance in 1998 as Arakan Rohingya National Organisation.)

In 1977, the government of Myanmar began ‘operation Nagamin’ or ‘Dragon King’, the operation aimed at the screening the population. 200,000 Rohingyas fled to Bangladesh and alleged the Myanmar government of army abuse.

In 1978, a massive military operation forced another 20,000 Rohingyas to seek refuge in Bangladesh. The operation included forced relocation, loot, rape and vandalism of mosques. Bangladesh stroked a UN-brokered deal with Burma and most of the refugees returned.

In 1982, Burma’s Junta passed a law thus identifying 135 ethnicities entitled to citizenship. The Rohingya’s despite of living in the Rakhaine for centuries weren’t among these 135.

In 1989, after martial law, same nature of operation was preceded against Rohingyas.

In 1994, RSO attacked a village in Maungdaw and caused damage and several civilian injuries. The group was based in Bangladesh at that time and crossed border by boat. The local Rohingya’s supported army against the group and thus they were defeated.

Another wave of conflict erupted in June 2012-2015 after the rape and murder of a young Buddhist woman. As a response, authorities destroyed mosques, conducted violent mass arrests and blocked aid to displaced Muslims. 140,000 people were displaced during this time period.

In October 2016, a large coordinated attack was preceded to three police posts, nine policemen were killed. This resulted in tense relations between Rohingyas and the security forces to front, hundreds of unarmed Rohingya men were killed and more than 100,000 were displaced after their villages were set on fire. Around 74,000 fled to Bangladesh

The recent conflict erupted in August, 2017, when military crackdown was prompted by an attack on Border Security Forces by Arakan Rohingya Salvation Army (ARSA). 200 Rohingya villages were burnt down, many were killed and 430,000 fled to Bangladesh. The UN Human-Rights chief has called the brutality of Myanmar as ‘Text book example of ethnic cleansing’.

From 1974-1994, the military insurgencies surged however didn't succeed due to lack of support of local Rohingyas. The locals always supported the government against these insurgencies. However, whenever when any activity was carried out by militants,  the locals were punished equally. Also, despite of living for centuries in the area and due the fact that they were the natives of area before Burman King attacked and took control of the area, it is highly unjustified that they are deprived of citizenship. This deprivation of their rights to move, to health facilities, to higher education has caused for Rohingyas to raise their weapons and adopt a more violent way.

The restrictive movement of human rights groups and aid workers in conflicted state has raised the worries oh human rights activists. More than 1 million Rohingyas are living as refugees in Bangladesh, Pakistan, Indian, Malaysia, Thailand and Saudi Arabia. In all these countries, including their native Mynmar, they are not given the right of citizenship thus are deprived of rights.